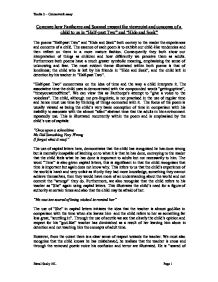 Compare how Fanthorpe and Scannel present the viewpoint and concerns of a child to us in &quot;Half-past Two&quot; and &quot;Hide and Seek&quot;

Compare how Fanthorpe and Scannel present the viewpoint and concerns of a child to us in "Half-past Two" and "Hide and Seek" The poems "Half-past Two" and "Hide and Seek" both convey to the reader the experiences and concerns of a child. The essence of each poem is to exhibit our child-like tendencies and then reflect on them in a more mature fashion. Consequently they both show our interpretation of things as children and how differently we perceive them as adults. Furthermore both poems have a much greater symbolic meaning, emphasising the sense of unknowing and fear. The most evident theme illustrated within both poems is that of loneliness; the child who is left by his friends in "Hide and Seek", and the child left in detention by his teacher in "Half-past Two". "Half-past Two" concentrates on the idea of time and the way a child interprets it. The associative time the child uses is demonstrated with the compounded words "gettinguptime", "timeyouwereofftime". We can view this as Fanthorpe's attempt to "give a voice to the voiceless". The child, although not pre-linguistic, is not practised in the use of regular time and hence must use time by thinking of things connected with it. The focus of the poem is usually viewed as being the child's very basic conception of time in comparison with his inability to associate with the almost "alien" abstract time that the adults in his environment repeatedly use. This is illustrated recurrently within the poem and is emphasised by the child's use of capitals: "Once upon a schooltime He Did Something Very Wrong (I forget what it was)" The use of capital letters here, demonstrates that the child has recognised he has done wrong but is mentally incapable of latching on to what it is that he has done, conveying to the reader that the child feels what he has done is important to adults but not necessarily to him. ...read more.

Her apologetic tone also demonstrates that the sin which he had committed that resulted in him having a detention is really not very serious at all as she does not even tell him off. Furthermore the fact that the simply "slots" him back into time is reflective of the theme that adults have more control of time in general as they know and understand objective time, moreover they have control of other forces that really give them an advantage over the child who has no control over time nor anything else and hence was able to escape from it unlike adults. The ending of "Half-past Two" is more positive than the rest of the poem; it initiates us to feel that the boy's life has only just begun. Fanthorpe attempts to explain the nature of time and how the child escaped from it. But there are also negative overtones in the ending such as that of the "hangnail" and its "silent noise". This of course is illogical and the hint of death makes the reader question what "other dimension" he has travelled into. These negative overtones can be symbolic of the child's gradual change into an adult in the process of maturation and hence loss of innocence. The death imagery is his first sample of this adult world Overall, "Half-past Two" is the story of an innocent child who has had his first experience of the cruel nature of society and the world we live in. Most importantly, it studies the nature of maturation, whether knowledge comes with loss of innocence. Similarly, "Hide and Seek" studies many of the themes in "Half-past Two". It also studies the metaphor for life theme but does so in a more bleak and eerie nature than the more sympathetic and hidden nature of "Half-past Two". Both poems are similar in many ways, firstly they are both studies of an individual, a child, who has been forgotten by those who he trusts and also respects. ...read more.

A similar theme is seen in "Half-past Two" when the child becomes defensive and petulant over the teacher not teaching him the concept of time. In "Hide and Seek" the same is seen only the child does not know of it until the end of the poem where his friends have left him and he has no-one to share his joy with. Also the boy is caught up in the misconception that he is winning the game and his attitude is therefore smug and somewhat arrogant. Furthermore, when the boy thinks he has won the game he exclaims in sheer joy: "Push off the sacks. Uncurl and stretch. That's better! Out of the shed and call to them: I've won!" This series of exclamation marks really highlight this boy's enjoyment at winning the game. However, due to the fact that he has not actually won his suffering his made even greater and the reader further sympathises with him. Moreover the reader senses the boy's loss as soon as he exits his hiding place: "The darkening garden watches. Nothing stirs. The bushes hold their breath; the sun is gone" It is significant that this technique of pathetic fallacy is used when the boy leaves hiding as can be seen to be symbolic of coming into the world where life is lonely. Here the negative connotations are very apparent by them being stated overtly, "Where are those who sought you" whereas in "Half-past Two" the conclusion is significantly more positive and hidden In conclusion we see that each of the poems study how innocent children first experience the nature of oppressive society but the conclusion and essentially message of "Hide and Seek" is considerably bleaker. We sense that "Half-past Two" is more of a magical experience for the child rather than the barren jejune nature of "Hide and Seek". It is also more positive and is more of a lesson than "Hide and Seek" that is a revelation of abandonment and loneliness. Tracks 2 - Coursework essay Bimal Sualy 10L Page 1 ...read more.