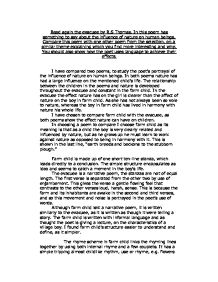 Compare this poem with one other poem from the selection, on a similar theme explaining which you find more interesting and why.You should also show how the poet uses language to achieve their effects.

Read again the evacuee by R.S Thomas. In this poem has something to say about the influence of nature on human beings. Compare this poem with one other poem from the selection, on a similar theme explaining which you find more interesting and why. You should also show how the poet uses language to achieve their effects. I have compared two poems, to study the poet's portrayal of the influence of nature on human beings. In both poems nature has had a large influence on the mentioned child's life. The relationship between the children in the poems and nature is developed throughout the evacuee and constant in the farm child. In the evacuee the effect nature has on the girl is clearer than the affect of nature on the boy in farm child. As she has not always been so vole to nature, whereas the boy in farm child has lived in harmony with nature his whole life. I have chosen to compare farm child with the evacuee, as both poems show the effect nature can have on children. ...read more.

The farm child is written with informal language and as thought the poet is giving a lecture, on the characteristics of a village boy. I found farm child's structure easier to understand and define, as it simpler. The rhyme scheme in farm child links the rhyming lines together by using both internal rhyme and a few couplets. It has a simple tripping almost childlike rhythm, use or rhyme, e.g. flowers and hours, half rhyme and consonance all suggest discordance in the poem. The rhyme scheme is ABBA CDC EDE k which is relatively simple and regular. In the evacuee every verse is an iambic pentameter with no rhyme. Although emjambement used in the first verse, makes the lines flow from one to the next. This feeling of continuity stops at the last line of the first verse, with a word using many harsh syllables. "Un-in-hi-bi-ted din." Although the farm child is a short poem, it is a fairly structured one, whilst the evacuee is much longer and mostly unstructured. ...read more.

The poet analyses the boy in farm child. Almost as a subject of a lecture. He raises him for scrutiny by using words such as "look" "mark" and "notice". These are all words to encourage observation, but it is written in irony, as we cannot see he boy only the poet can. The poet seems objective, the poets overall tone is one of analysis and scrutiny. The poet of the evacuee is telling a story, as this is a narrative poem. He writes as though he is an eyewitness to the child's movements since she has awoken. I prefer the farm child because it feels as though you are being spoken to directly by the poet, and his use of informal language made me feel involved. I find that farm child is a more interesting poem as it is a short poem that immediately makes clear what it talks of, it leads directly to a conclusion, Using clear concise language. It makes the reader analyze the ten lines in order to interpret the message it is giving. I feel the evacuee is too unstructured for my tastes and the meaning is too clear and simple. ...read more.