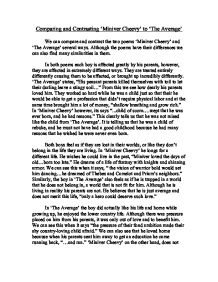 Comparing and Contrasting 'Miniver Cheevy' to 'The Average'.

Comparing and Contrasting 'Miniver Cheevy' to 'The Average' We can compare and contrast the two poems 'Miniver Cheevy' and 'The Average' several ways. Although the poems have their differences we can also find many similarities in them. In both poems each boy is affected greatly by his parents, however, they are affected in extremely different ways. They are treated entirely differently causing them to be affected, or brought up incredibly differently. 'The Average' states, "His peasant parents killed themselves with toil to let their darling leave a stingy soil..." From this we see how dearly his parents loved him. They worked so hard while he was a child just so that their he would be able to get a profession that didn't require physical labor and at the same time brought him a lot of money, "shallow breathing and grow rich." ...read more.

In 'Miniver Cheevy' he longs for a different life. He wishes he could live in the past, "Miniver loved the days of old...born too late." He dreams of a life of fantasy with knights and shinning armor. We can see this when it says, " the vision of warrior bold would set him dancing...he dreamed of Thebes and Camelot and Priam's neighbors." Similarly, the boy in 'The Average' also feels as if he is trapped in a world that he does not belong in, a world that is not fit for him. Although he is living in reality his parents are not. He believes that he is just average and does not merit this life, "only a hero could deserve such love." ...read more.

dreamed...mourned...cursed...scorned...annoyed." In conclusion, neither of the boys ends up completely happy. They both ran from themselves in the end and just gave up on exploring, discovering, and moving on in life. All that the boy from 'The Average' wanted was to be an ordinary man...just "average." He did not want to explore and try to become superior. When he was forced to try, he was not able to succeed, he knew it was not for him and therefor ran from it. " He saw the shadow of an average man attempting the exceptional, and ran." Miniver Cheevy also ran from himself in the end although he did think about his life and did try to make sense of things, he gave up in the end, "...kept on thinking; Miniver coughed, and called it fate, and kept on drinking." ...read more.