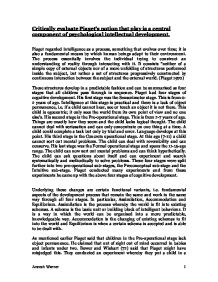 Critically evaluate Piaget's notion that play is a central component of psychological intellectual development. Piaget regarded intelligence as a process, something that evolves over time; it is also a fundamental means by which human beings adapt to their environment. The process essentially involves the individual trying to construct an understanding of reality through interacting with it. It consists "neither of a simple copy of external objects nor of a mere unfolding of structures performed inside the subject, but rather a set of structures progressively constructed by continuous interaction between the subject and the external world. (Piaget 1970) These structures develop in a predictable fashion and can be summarised as four stages that all children pass through in sequence. Piaget had four stages of cognitive development. His first stage was the Sensorimotor stage. This is from 0-2 years of age. Intelligence at this stage is practical and there is a lack of object permanence, i.e. if a child cannot hear, see or touch an object it is not there. This child is egocentric; it only sees the world from its own point of view and no one else's. His second stage is the Pre-operational stage. This is from 2-7 years of age. ...read more.

They used infra red light to see the child. Piaget observed speech in children in a kinder-garten class and this reinforced his view on Egocentrism. He found that children are literally self-centred and only see the world from their own point of view. He also found that children use collective monologue, have one sided conversations and talk about themselves. Piaget used three mountains to demonstrate egocentrism. The three mountains were of different colours and one had snow on the top, one had a house and the other a cross. The children walked around the mountain and then sat down. A doll was placed somewhere in the mountains and the children were shown ten views of the mountains and asked to choose the one that represented how the doll saw it. Only seven to eight year olds got it correct. Piaget stated that children below this age are Egocentric. Many have disputed Piaget's conclusion. Bourke (75) put the mountain on a turntable and use a doll from Sesame Street. She found that even three and four year olds could solve the task. Hughes (84) also copied Piaget's experiment. He criticised Piaget saying that if the task had been more practical the children could have completed it. ...read more.

This is disputed, as even adults are not all able to this. Adults are still able to be egocentric. Not all cultures require logic and not every one is able to use logic. In conclusion Piaget's theory attempted to explain how children move from being irrational and illogical to rational and logical. Much of the evidence that Piaget used is flawed. He used the clinical method, which involved discussing the task with the child in an unstandardised and unscientific way. A problem with this method is that it makes demands on a child's ability to communicate and as a result Piaget underestimated the cognitive abilities of children. He also kept no figures of his experiments and there is no record of the number of children used, their ages or there gender. Piaget's stages imply a degree of consistency and thought across a range of different areas but some inconsistency is to be expected. The rate of progress through the stages will vary from child to child due to differences in environmental stimulation. Piaget provided a detailed description of the changes in cognitive development. He described how children think but did not explain why or how. Brainerd (78) said, "This is nothing more than an elaborate description of what we already know". However Piaget's concepts are used in all schools today and his approach has given rise to much research and he is one of the most significant theorists on cognitive development. ...read more.