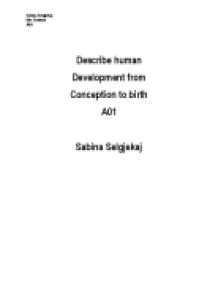 ﻿Sabina Selgjekaj Mrs Conway A01 Describe human Development from Conception to birth A01 Sabina Selgjekaj In A01 I will present the unit of child development and I will carefully talk about human development from conception to birth. In A01 I will be drawing different factors and main points that have links to how a baby is conceived, I will independently explain in full depth the following: Fertilisation Foetal development After I have made good accounts on Fertilisation and Foetal development, I will then be going over and explain step by step the course of pregnancy; this means that the following are the most important steps and procedures needed to be done in order to have a healthy pregnancy. Pregnancy tests Antenatal care and screening Arrangements for labour Preparation for parenthood Birth of baby Postnatal care immediately after birth How a baby is conceived? For Woman to conceive it is important to have an overview of the female?s menstrual cycle, this is highly beneficial as it plays a great deal of importance in the role of contraception. Between majority of females 28 days cycle the egg comes to maturity in the ovary during the first 1-5 days. After the 5th day and 13th day the lining in the uterus begins to thicken for preparation for the egg. Roughly around the 14th day the female begins to ovulate, during the process the follicle burst open which then releases the egg into the fallopian tubes. From then on after this process is carried out the male?s sperm has fertilize the egg which plants itself inside the uterus and once done starts to begin to grow. However if this process doesn?t work the egg will flushed out of the female?s menstrual cycle and the cycle will repeat itself. During fertilisation the male e********s about 100 million sperm inside a female and it is estimated that 200 of the sperm survives to make it to the fallopian tubes and encounters the egg. ...read more.

The bladder rests on the pelvic floor and the shape and size of the bladder depends on how much urine it can take. (Organ B) Seminal Vesicle: These are sack like pouches which attach the vas deferens near the base of the bladder; they produce liquids that nourish the sperm. The fluid of the seminal vesicles makes up the volume of the male?s e*********y fluid. (Organ C) Prostate Gland: This gland is located below the urinary bladder in front of the r****m. This gland contributes in additional fluid to the e*******e and helps move sperm along. This fluid also helps nourish the sperm. The urethra that carries the e*******e to be ejected during an o****m will run through the centre of the prostate gland. (Organ D) Urethra: This is a tube which is connected from the bladder to outside the body which carries the urine. Within the males reproductive system it has additional functions of e*********g s***n when a male has an o****m. When the p***s is e***t during s****l intercourse the flow of the urine is blocked from the urethra and only the s***n is to be e********d during an o****m. (Organ E) Vas Deferens: This is a long and muscular tube that travels from the epididymis into the pelvic cavity to just behind the bladder. This organ plays the role of transporting the mature sperm to the urethra, the tube that carries sperm or urine to the outside of the body in preparation for e*********n. (Organ F) Epididymis: This is a long and coiled tube that rests on the backside of each t******e; it transports and stores sperm cells which are produced in the testes. It also plays the role of bringing the sperm to maturity as that sperm emerges from the testes are immature and incapable of fertilisation with the egg. When a male is s******y aroused, contractions force the sperm into the vas deferens. ...read more.

'Throughout my pregnancy everyone commented on how large my bump was, including the midwives. I was given the impression that I would deliver before my due date, especially as this was my second pregnancy. However, we were all wrong. I had planned on having a home birth, so when my due date came and went I was getting a bit desperate. I really wanted a home birth, but, even more, after all the horror stories I had heard about inductions, I did not want to be induced. Read more: http://www.babycenter.com.au/pregnancy/labourandbirth/birthstories/phoebe/#ixzz285DVI72w Preparation for parenthood It is vital that mothers are prepared for parenthood so going to classes which allow other new mums to open up and ask any questions in which they do not know the answer to to be answered correctly by either professionals or whoever is in charge of the class. Also it gives a chance for mothers to express any worries they might have to the rest of the group. Postnatal care immediately after birth After the baby is born the midwife does regular check-ups to see how healthy the baby and mother are and to find out ways in which they are managing themselves. After the birth of the baby, he or she is taken away to check the temperature and see if it is normal, this is also a chance for the baby to be wrapped up in a blanket to ensure that the baby is kept warm at all times. Situations whereby the baby is born healthy and without any complications it is then quickly wrapped up with a blanket and given to the mother where the mothers skin and babies skin are touching as it helps to keep the baby warm and be close to their mother for the first time. The midwife will then clamp the umbilical cord in two places. It is known that when babies are born they are born a dark purple/blue colour as they first enter the world; however it takes some time for the baby?s airwaves to be checked and cleared by the doctor allowing them to breathe. ...read more.