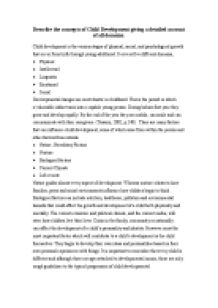 ﻿Describe the concepts of Child Development giving a detailed account of all domains. Child development is the various stages of physical, social, and psychological growth that occur from birth through young adulthood. It covers five different domains, 1. Physical 2. Intellectual 3. Linguistic 4. Emotional 5. Social Developmental changes are most drastic in childhood. This is the period in which a vulnerable infant turns into a capable young person. During babies first year they grow and develop rapidly. By the end of the year they are mobile, can smile and can communicate with their caregivers. (Tassoni, 2002, p.248). There are many factors that can influence child development, some of which arise from within the person and other factors from outside. 1. Nature -Hereditary Factors 2. Nurture 3. Biological factors 4. Current Climate 5. Life events Nature guides almost every aspect of development. Whereas nurture relates to how families, peers and social environments influence how children begin to think. Biological factors can include nutrition, healthcare, pollution and environmental hazards that could affect the growth and development of a child both physically and mentally. The current economic and political climate, and the current media, will steer how children live their lives. Crisis in the family, community or nationally can affect the development of a child?s personality and identity. However most the most important factor which will contribute to a child?s development is the child themselves. They begin to develop their own ideas and personalities based on their own personal experiences with things. ...read more.

Another theorist Vygotsky argued against Piaget?s beliefs. He said that a child?s learning and action take place in well structured social contexts. He believed that adults and older children contribute to child?s performance. Vygotsky described the ?Zone of Proximal Development?, (ZPD), this is to help describe something that the child would not be able to achieve on their own but would be able to achieve with support from another person. Given appropriate help children have potential to go beyond what they could achieve on their own. (Scott and Spencer, 1988, p.29-35). Linguistic Development Language development is the process by which children come to understand and communicate language during early childhood. (Healthofchildren, 2012). From birth to five years children develop language at a rapid pace. Infants start without language, yet by 4 months of age, babies can discriminate speech sounds and engage in babbling. The stages of language development are universal among humans. However, the age and the pace at which a child reaches each milestone of language development vary greatly among children. Children?s ability to develop language usually develops quicker than their ability to communicate. There have been two styles of development recognised in children?s development. 1. Referential language development (RFD) 2. Expressive language development (ELD) RFD refers to the process in which children develops single words, then develop them into two word sentences and then three word sentences. ELD is where children first speak in long unintelligible babbles that mimic the cadence and rhythm of adult speech. ...read more.

Being able to effectively communicate, listen and empathise with others forms the basis for healthy relationships and the ability to successfully fit into social situations both now and in the future. Many factors affect the social development of a child, some of those include, family, peers, culture, and the media. There are many theorists associated with social development, 1. Vygotsky, who said ?every function in the child?s cultural development appears twice; first on a social level, and later, on an individual level; first between people and then inside the child. This applies equally to voluntary attention, to logical memory, and to the formation of concepts. All higher functions originate as actual relationships between individuals.? 2. Bandura believed that behaviour is learned from the environment through the process of observational learning. Children imitate the behaviour they have observed. 3. Erikson developed the stages of ego identity. This is the conscious sense of self that we develop through social interaction. Erikson believed that at each stage people experience a conflict that serves as a turning point in their development. A child of nine months falls into the first category. 1. 0-1 years: Trust vs. Mistrust: Because the infant is completely dependant the development of trust id based on how much the child can depend on their caregivers. If a child develops trust they will feel safe and secure in the world, however failure to do so as the result of inconsistent care, will result in fear and a belief that the world is inconsistent and unpredictable. ...read more.