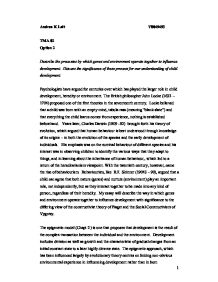 Describe the processes by which genes and environment operate together to influence development. Discuss the significance of these process for our understanding of child development.

Andrea K Lait V0049493 TMA 02 Option 2 Describe the processes by which genes and environment operate together to influence development. Discuss the significance of these process for our understanding of child development. Psychologists have argued for centuries over which has played the larger role in child development, heredity or environment. The British philosopher John Locke (1632 -1704) proposed one of the first theories in the seventeenth century. Locke believed that a child was born with an empty mind, tabula rasa (meaning "blank slate") and that everything the child learns comes from experience, nothing is established beforehand. Years later, Charles Darwin (1809 -82) brought forth his theory of evolution, which argued that human behaviour is best understood through knowledge of its origins - in both the evolution of the species and the early development of individuals. His emphasis was on the survival behaviour of different species and his interest was in observing children to identify the various ways that they adapt to things, and in learning about the inheritance of human behaviour,. which led to a return of the hereditarianism viewpoint. With the twentieth century, however, came the rise of behaviourism. Behaviourists, like B.F. Skinner (19043 - 90), argued that a child can agree that both nature (genes) and nurture (environment) ...read more.

Preferably the studies would need to follow subjects from before the child is born until adulthood collecting information on the external environmental factors such as nutrition, psychosocial and physical environments the participants interacted with, to make the studies more realistic. Andrea K Lait V0049493 Adoptions studies have also been carried out to investigate if adopted children are more "genetically similarly to their adoptive parents than to their natural parents", and this has been found to be the case, which also support the nurture side of the debate. An additional example is that of John Bowlby's (1959) Attachment Theory, which demonstrated that caregivers develop a close bond during the first year of the baby's life and that if the mother-baby are forcibly separated they become quite distressed. This shown how humans have a "genetically determined psychological characteristic" that prejudices them to 'bond' with a particular caregiver. On the other hand, many investigations have shown that a child's environment plays a large role in their development. This may seem a less influential factor on one's life, but considering the huge impact the environmental surroundings have on development, it warrants in depth examination. An enquiry carried out by The British National Child Development Study involving 16,000 children showed how the effects of belonging to a certain social class had an effect on the child's reading development. ...read more.

Considering the evidence stated, it would be wrong to believe that one factor, either genetics or environment, determines a child's developmental ability. It appears that both of these factors contribute to the child's aptitude. Heredity, as well as environment plays an important role although not exactly equal in pressure. A child's environment seems to be more able in determining development ability than heredity is. Through investigating this theme it seems heredity is a deterrmining factor of the child's potential, but the environmental experiences determine how far that child will reach their full potential. It appears that nature designs the outline and initial stages Andrea K Lait V0049493 of development and nurture modifies and refines development to fit into the environmental circumstances. The in-ability to recognize which factor, nature or nurture, is responsible for any specific trait, but knowing that one or both of the two is responsible, will keep the argument of genetics vs. environment in the forefront of our search for answers for a long, long time. I would conclude that both heredity and environment affect child development, and current research seems to suggest that environmental factors appear to have more sway. Genetics and the varying environmental issues that the child faces will determine to what extent their development progresses thus determining the child's final mental abilities. ...read more.