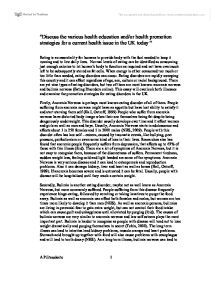 "Discuss the various health education and/or health promotion strategies for a current health issue in the UK today " Eating is an essentiality for humans to provide body with the fuel needed to keep it running and to live daily lives. Normal levels of eating can be identified as consuming just enough calories to let human's body to function as required and not have overmuch left to be subsequently stored as fat cells. When energy is either consumed too much or too little than needed, eating disorders can occur. Eating disorders are rapidly sweeping this country and it can affect regardless of age, sex, culture or racial background. There are yet nine types of eating disorders, but two of them are most known: anorexia nervosa and bulimia nervosa (Eating Disorders online). This essay will overlook both illnesses and examine the promotion strategies for eating disorders in the UK. Firstly, Anorexia Nervosa is perhaps most known eating disorder of all of them. ...read more.

As well as anorexic persons, bulimics are living in perennial fear to gain extra weight, but can not control their food intake which can cause guilt and unhappiness until alleviated by purging (ibid). The causes of bulimia nervosa are very similar to anorexia nervosa and law self esteem plays the most important part. Bulimia is harder to recognise as people with disease will tend not to lose weight dramatically and purging themselves in secret (Tobin, 2000). The long term illness can lead to intestinal and kidney problems, muscle cramps and heart problems. Stomach acid brought up together with food will also cause problems with oesophagus and will lead to tooth decay (NHS). As a long term illness, bulimia nervosa can lead to heart failure and death. Bulimic people however will not be hospitalised, but it will be a long and difficult process until full recovery. These days eating disorders are very common illnesses and most cases of these eating disorders will start during adolescence or early adulthood, even some cases from late childhood. ...read more.

Conversely to charities that encourages people to get help and get better, Pro - Ana and Pro - Mia websites are sharing information and support with those who want to loose weight and reach a 'size zero'(Matyszczyk, 2009). Although these websites are dangerous for young people; they are not banned and are easily reachable for everyone with access of Internet. Consequently, in September 2009, The Royal College of Psychiatrists (2009) called for urgent governmental action, stating: Government must do more to address the dangers of pro-eating disorder websites and keep young people safe online. In a brief conclusion, eating disorders is very dangerous and is serious problem. More and more young adolescences are getting ill because of desirer to be thin and follow "thinspiration". Even there are a lot of reasons why people get eating disorders, media and fashion world should think more carefully towards young people and advertise the healthier image of body. The government, indeed, is aware of how big this problem is in United Kingdom, but putting more effort towards an acceptance of people of all shapes and sizes is society, would help to decreases a number of teenagers from suffering from eating disorders. ...read more.