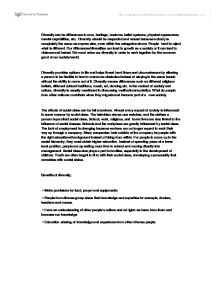 Diversity and Explain the potential effects of discriminatory practice on those who use health or social care service.

Diversity can be differences in race, heritage, customs, belief systems, physical appearance, mental capabilities, etc.. Diversity should be respected and valued because nobody is completely the same as anyone else, even within the categories above. People tend to reject what is different. Our differences/diversities can lead to growth as a society or it can lead to violence and hatred. We must value our diversity in order to work together for the common good of our society/world. Diversity provides options in life and helps thwart hard times and circumstances by allowing a person to be flexible in how to overcome obstacles instead of staying in the same trench without the ability to move out of it. Diversity means differences such as different religious beliefs, different cultural traditions, music, art, dancing etc. In the context of society and culture, diversity is usually mentioned in discussing multicultural societies. What do people from other cultures contribute when they migrate and become part of a new society. The effects of social class can be felt anywhere. Almost every aspect of society is influenced in some manner by social class. The television shows one watches, and the clothes a person buys affect social class. ...read more.

Stereotyping; Stereotypes are generalizations about a group of people whereby we attribute a defined set of characteristics to this group. These classifications can be positive or negative, such as when various nationalities are stereotyped as friendly or unfriendly. It is easier to create stereotypes when there is a clearly visible and consistent attribute that can easily be recognized. This is why people of color, police and women are so easily stereotyped. Example of stereotyping in health and social care could be; � All runners have bad knees and should put up with the pain � Overweight people are lazy and do nothing to help their situation � Male nurses are likely to be gay. Prejudice; The term is often used to describe the way people sometimes judge others without knowing them. The judgements are made on the basis of labels and stereotypes and not the individual in question. Once we realise that the term prejudice is based on the term pre-judgement we can easily see the true meaning. In health and social care people will be treated disadvantageously because of someone else's lack of knowledge about them. Rights; Rights are often linked with responsibilities. ...read more.

Disability discrimination causes a person with a disability, whether mental or physical, to not have the same rights and opportunities as anyone else. All employers are required to make reasonable accommodation for a disabled worker, but this leaves the law open to interpretation. Although businesses are required to be accessible to people in wheelchairs accessibility is still often a touchy subject for many. Race-based discrimination, or racism, is discrimination based upon a person's race. For example, an Black candidate may be denied employment or admission to an organization or school even if he is better qualified than a white person. Discrimination based on national origin is also frequent, with the person's country of origin being the basis on which the discrimination occurs. Sex-based discrimination, or sexism, occurs when people are treated unfairly due to their sex. Although sex-based discrimination can happen to anyone, it is generally to the detriment of women. Sexual harassment is sometimes considered a form of sexism, although it can also be in its own category. Sexism can be overt, such as not hiring a woman for a job when she is the most qualified, or more hidden. Some people consider using women's bodies to sell products, as is common in advertising, to be a form of sexism. There are other forms of discrimination as well, including discrimination against people of a certain religion or sexual orientation. ...read more.

This is a fair essay but a little confused in places. I feel that the writer has done some excellent research but not always selected the content that is relevant.

It could be enhanced by including some up to date figures and legislation. Some more complex examples would also increase the depth of writing.