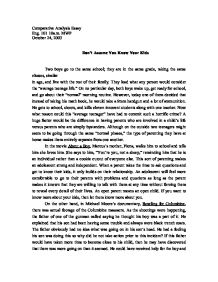 Don't Assume You Know Your Kids.

Comparative Analysis Essay Eng. 101 10a.m. MWF October 24, 2003 Don't Assume You Know Your Kids Two boys go to the same school; they are in the same grade, taking the same classes, similar in age, and live with the rest of their family. They lead what any person would consider the "average teenage life." On no particular day, both boys wake up, get ready for school, and go about their "normal" morning routine. However, today one of them decided that instead of taking his math book, he would take a 9mm handgun and a lot of ammunition. He gets to school, shoots, and kills eleven innocent students along with one teacher. Now what reason could this "average teenager" have had to commit such a horrific crime? ...read more.

An open parent means an open child. If you want to know more about your kids, then let them know more about you. On the other hand, in Michael Moore's documentary, Bowling for Columbine, there was actual footage of the Columbine massacre. As the shootings were happening, the father of one of the gunman called saying he thought his boy was a part of it. He explained that his son had been having some trouble and always wore black trench coats. The father obviously had no idea what was going on in his son's head. He had a feeling his son was doing this so why did he not take action prior to this incident? If this father would have taken more time to become close to his child, then he may have discovered that there was more going on than it seemed. ...read more.

It would be assumed that every parent wants their children to have those qualities, however they don't realize what a big influence they have. Consequently, when a parent is not involved and does not communicate with their kids, the teens are more apt to become less social, make bad decisions such as using drugs or alcohol, and develop depression. The children might start to rebel because they've grown to believe that their parents don't care about the decisions they make or the things they do. In general, the child who has parents that show they care are more likely to grow up with higher self-esteem and morale. In conclusion, the amount of effort a parent puts into becoming a part of their children's lives, ultimately effects the way those children will perceive life itself. Therefore, two adolescents may appear to be the same type of "average" teenager, when in fact, their parents are a huge factor in why they are completely different. ...read more.