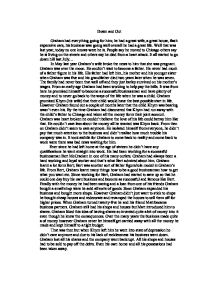 Down and Out Graham had everything going for him; he had a great wife, a great house, flash expensive cars, his business was going well overall he had a great life. Well that was last year, today no one knows were he is. People say he moved to Chicago others say he is living on the streets and others say he died from a heart attack. It all started to go down hill last July... In May last year Graham's wife broke the news to him that she was pregnant. Graham was over the moon. He couldn't wait to become a father. He never had much of a father figure in his life. His father had left him, his mother and his younger sister when Graham was five and his grandfather died two years later when he was seven. ...read more.

He isolated himself from everyone, he didn't pay that much attention to the business and didn't realise how much trouble his company was in. It took awhile for Graham to come back to reality and come back to work were there was bad news waiting for him. Ever since he had left home at the age of sixteen he didn't have any qualifications he went straight into work. He had been working for a successful businessman Bert McCracken in one of his many outlets. Graham had always been a hard working and loyal worker and that's what Bert admired about him. Graham learnt a lot form Bert; Bert was another sort of father figure/role model in Graham's life. From Bert, Graham learnt many things how to be a good businessman how to get what you want etc. Since working for Bert, Graham had started to save up so that he could one day buy his own business and become as successful and famous like Bert. ...read more.

Graham lost all his shares and the company went bankrupt. All his shops and houses had to be sold to pay off the debts. Even his own home and all his possessions had been taken away. Graham went to stay with his mother and started working for his sister but it didn't feel right it wasn't the same. He felt ashamed and couldn't believe this had happen to him. After all promises that he made to himself and everyone else that he would never go back to his childhood life, however things had become a lot worst. He had no job, no wife, no home, he had no life. Graham decided to leave his mother's house and go find his fortune and success for the second time. From that point on we lost all track of Graham Cunningham. No one knew were he was or what he was doing. We still don't know if he is alive or not. ...read more.