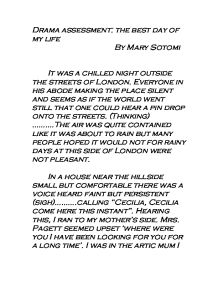 Drama assessment: the best day of my life.

Drama assessment: the best day of my life By Mary Sotomi It was a chilled night outside the streets of London. Everyone in his abode making the place silent and seems as if the world went still that one could hear a pin drop onto the streets. (Thinking) ..........The air was quite contained like it was about to rain but many people hoped it would not for rainy days at this side of London were not pleasant. In a house near the hillside small but comfortable there was a voice heard faint but persistent (sigh)..........calling "Cecilia, Cecilia come here this instant". Hearing this, I ran to my mother's side. Mrs. Pagett seemed upset 'where were you I have been looking for you for a long time'. I was in the artic mum I said looking at the old family photos. Mum did not alter a word I am sure she was proud but all that came out of her mouth was "come and help me with the laundry". ...read more.

In my early teenage years I was never allowed to go out to parties with my friends only to family dinners which were mostly boring. I was scared of my father especially who managed to instill all ounce of fear in me of what will happen if I disobeyed his rules (sad).......... Or so I thought at the time but who could blame me I was too young to think on that level. I never became rebellious (deep in thought)... I was too afraid to have such a thought. I hated my parents and felt as if I was in a prison held without committing an offence. (Happiness) But as God was to have it that prospect in my life changed and virtually everything else in it became different. This Saturday was quite a peculiar one when instead of performing back breaking house chores mum requested me to wear my best cloth for we all were going to be making an appearance at grandma's house for an annual feast which was put off from last week. ...read more.

At the end of the speech there was a glow in his eyes and the formerly silent place was bombarded with sounds of applauses and jeers of appreciation. The emotion in me was quite different, my eyes were shielded with tears and they started to fall unconditionally. All the hate in me turned into love and I was truly happy. As people left I called my parents and poured my heart to them. We hugged and kissed and then I felt no day in my life will ever be this perfect. I then said, "Who is up to some ice-cream". Laughing we went into the house and I could hear birds singing loudly like they were sharing in my good fortune. Closing the family album and looking into the eyes of my husband who I loved dearly, something in the inner part of me then said "who ever has not had such an emotional moment in their lives has much to expect in the near future for my case was different because after that faithful day my life fell completely into place. ...read more.