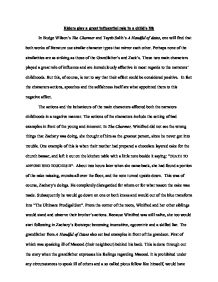 Elders play a great influential role in a child's life.

Elders play a great influential role in a child's life In Budge Wilson's The Charmer and Tayeb Salih's A Handful of dates, one will find that both works of literature use similar character types that mirror each other. Perhaps none of the similarities are as striking as those of the Grandfather's and Zack's. These two main characters played a great role of influence and are incredulously affective in most regards to the narrators' childhoods. But this, of course, is not to say that their affect could be considered positive. In fact the characters actions, speeches and the selfishness itself are what appointed them to this negative affect. The actions and the behaviours of the main characters affected both the narrators childhoods in a negative manner. The actions of the characters include the setting of bad examples in front of the young and innocent. In The Charmer, Winifred did not see the wrong things that Zachary was doing, she thought of him as the greatest person, since he never got into trouble. ...read more.

Thus, both characters set bad examples for their young. It is also the speech and the words of wisdom from an elder that affects a child's character. But in this case, both the main characters took advantage of their knowledge in religion and used it hypocritically. In The Charmer and in A Handful of dates, both the characters showed the outward of goodness and the inward of darkness. This is to say that most people considered them highly respectful, kind-hearted and knowledgeable in their own ways. In Zack's case, on the outside he was knowledgeable and a very skilled orator who was able to quote biblical versus out of thin air. Likewise, the grandfather was very respected, pious and knowledgeable about his religion. But in reality, both were egotistic, selfish and skilled orators, to which only the young and the innocent such as Winifred and the grandson had been exposed to. This terrible human nature proved to the both of them that nothing is as it seems. ...read more.

This brought a sudden change of emotion in the grandson towards his grandfather. Both stories as said before are completely different as to plot but similar as to characterization. The main characters Zack and the grandfather affected the narrators' negatively in their childhood by their bad examples, abusage of religion and selfishness. When both the narrators reached adolescence, they became aware of the flaws and behaviour of their elders. Yes, it is true that Zack and the grandfather are the causes for their disappearance of childhood/ innocence, but if they had not been exposed to such behaviour, they too would have effectively followed in their footsteps. For example, In The Charmer, Winifred's maturing insights helped her to realize how important it was for her as a mother, to deal with her own children in a clear-eyed manner before they became like her "charming" brother Zack. From these two stories, I have come to believe that a child can see right into the depth of a human being, cutting through their layers like a cake. They are excellent judges of character and can naturally tell right from wrong in their pure state. ...read more.