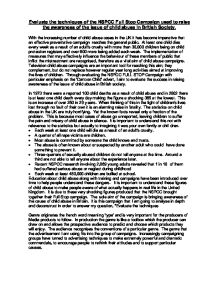 Evaluate the techniques of the NSPCC Full Stop Campaign used to raise the awareness of the issue of child abuse in British Society.

Evaluate the techniques of the NSPCC Full Stop Campaign used to raise the awareness of the issue of child abuse in British Society. With the increasing number of child abuse cases in the UK it has become imperative that an effective preventative campaign reaches the general public. At least one child dies every week as a result of an adult's cruelty with more than 30,000 children being on child protection registers and over 600 more being added each week. The implementation of measures that may effectively influence the behaviour of these members of public that inflict the mistreatment are recognised, therefore as a vital aim of child abuse campaigns. Television child abuse campaigns are an important tool for reaching this aim; they complement, but do not replace however regular year long activities aimed at improving the lives of children. Through evaluating the NSPCC FULL STOP Campaign with particular emphasis on the 'Cartoon Child' advert, I aim to evaluate the success in raising awareness of the issue of child abuse in British society. In 1973 there were a reported 100 child deaths as a result of child abuse and in 2002 there is at least one child death every day making the figure a shocking 365 at the lowest. This is an increase of over 250 in 29 years. When thinking of this in the light of children's lives lost through no fault of their own it is an alarming raise in fatality. The statistics on child abuse in the UK are truly horrifying. Yet the known facts reveal only a fraction of the problem. This is because most cases of abuse go unreported, leaving children to suffer the pain and misery of child abuse in silence. ...read more.

The strap line reads: "REAL CHILDREN DON'T BOUNCE BACK " The ad campaign will be supported by a range of materials and activities for professionals such as social workers, teachers, GPs and sports coaches to help them to recognise signs of abuse. The same message will go to the public through leaflets to be distributed in doctors' surgeries, hospitals and community venues. Around 60,000 of the NSPCC's campaign, partners will distribute posters based on the new ads. The new campaign, supported by Microsoft, cost the NSPCC �2m. This was due to the fact that it is not a cheap medium of advertising to use but it was the best way to touch huge numbers of children and young people who would never come forward otherwise. Saatchi and Saatchi produced the campaign for the NSPCC that I have analysed in this project. Saatchi and Saatchi work throughout Europe as well as in the USA and Australia. In the UK, there are agencies at work in most large cities but the largest being based in London. Saatchi and Saatchi have allocated roles in the agencies with the essential person being the account executive. This representative of the agency will look after the business. When the right media for the adverts have been chosen, the creative director will work with the copywriters and art directors to plan the ads. These people are the persuaders who have brainstorming sessions where they think up the most original line and most telling image. The art director designs the way the ad will look and works with layout artists and typesetters to create the maximum impact. They work closely with the copywriters who write slogans and catch words. ...read more.

The main people being represented in this advert and the father and son. These are however not exactly who the advert is aimed at. It' s target audience is everybody and after its launch 90% of the general public agreed that 'we all have a role to play in ending cruelty to children' and two thirds agreed that 'we really can put an end to cruelty to children.' British agency, Saatchi and Saatchi topped the list in 1990 with an income of well over �114,000,000. Because so much money is involved in advertising, it is not surprising that it is a subject that arouses a great many differences of opinion. With Saatchi and Saatchi's direct focus on child abuse in the advert it is hardly surprising that the commercial comes with a post 9 p.m. watershed viewing restriction. Since the early nineties, consumers have grown immune to charitable tugs on their heartstrings and wallets. It is a result of more charities calling for their support and greater awareness - and acceptance of - the issues they represent. Faced with more competition, NSPCC realised they needed powerful marketing. But with limited budgets, few could spend more. The solution was obvious. Why not increase the power of imagery used in their ads instead? This campaign was not about raising profit or funds, the NSPCC's aim was to produce awareness of child abuse issues. Although there are no definite figures to prove that this campaign has reduced the amount of child abuse, they continue to be made as a form of communicating with the public and raising awareness. Trevor Beattie of Campaign said, " The NSPCC campaign should have every man jack of us walking round with our heads held high for the rest of our careers. It's an astonishingly well-integrated achievement. A crusade, no less. It will succeed. Because it deserves to. Because its brilliant. FULL STOP. ...read more.