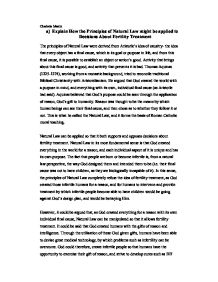 Charlotte Martin a) Explain How the Principles of Natural Law might be applied to Decisions About Fertility Treatment The principles of Natural Law were derived from Aristotle's idea of causitry- the idea that every object has a final cause, which is its goal or purpose in life, and from this final cause, it is possible to establish an object or action's good. Activity that brings about this final cause is good, and activity that prevents it is bad. Thomas Aquinas (1225-1274), working from a monastic background, tried to reconcile traditional Biblical Christianity with Aristotelianism. He argued that God created the world with a purpose in mind, and everything with its own, individual final cause (as Aristotle had said). Aquinas believed that God's purpose could be seen through the application of reason, God's gift to humanity. Reason was thought to be the means by which human beings can see their final cause, and then chose as to whether they follow it or not. This is what he called the Natural Law, and it forms the basis of Roman Catholic moral teaching. Natural Law can be applied so that it both supports and opposes decisions about fertility treatment. Natural Law in its most fundamental sense is that God created everything in the world for a reason, and each individual aspect of it is unique and has its own purpose. ...read more.

People of these beliefs would argue that God created those people in that way so that they could not have children, for example, it could be that, if they were able to he children, they would have been unfit parents, and it would be in the best interests of children that they did not become parents, so God made them infertile. So, if an infertile person wanted fertility treatment, it could be argued that this would be going against God's desire for that person, and they therefore do not have to the right to a child. The claim that every adult has the right to a child focuses solely on the needs and rights of the adult, and treats the child as a mere object. It is clear that the most important element is the child, and the quality of the upbringing that a child born into any of the above situations would experience. The claim is also based on the idea that all humans are equal, and they are not. They are equal in terms of their human rights and the way in which they deserve to be treated, but not all humans are of equal capability when considering their capability of nurturing a child. For this reason, not every adult has the right to a child; it is every child that has the right to the upbringing that they deserve. ...read more.