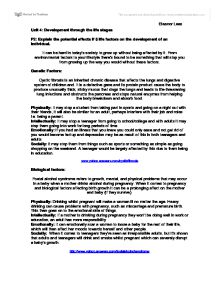 Explain the potential effects if 5 life factors on the development of an individual.

Unit 4: Development through the life stages P2: Explain the potential effects if 5 life factors on the development of an individual. It can be hard in today's society to grow up without being affected by it. From environmental factors to your lifestyle there's bound to be something that will stop you from growing up the way you would without these factors. Genetic Factors: Cystic fibrosis is an inherited chronic disease that affects the lungs and digestive system of children and. It is a defective gene and its protein product cause the body to produce unusually thick, sticky mucus that clogs the lungs and leads to life-threatening lung infections and obstructs the pancreas and stops natural enzymes from helping the body breakdown and absorb food. Physically: It may stop a student from taking part in sports and going on a night out with their friends, it will also be similar for an adult, perhaps interfere with their job and roles i.e. being a parent. Intellectually: It may stop a teenager from going to school/college and with adults it may stop them going into work for long periods of time Emotionally: if you had an illness that ...read more.

Physically: They will have scars, bruises, that they will cover up and not show anyone. Intellectually it may stop them going to school or work, children wont be telling their parents making it worse for themselves. Intellectually: Being bullied will slow down someone's aspirations, with children it may stop them going to school and with adults they may not go to work due to embarrassment. Adults are more likely to overcome bullying rather than children. Emotionally: Bullying can lower self esteem and can lead to depression and anxiety. These emotions then lead to suicide; it shows that over 5000 people committed suicide in 2008 which is a large percentage along side murders. Socially: It may stop that person wanting to make friends or even talk to anyone, including their own parents. Most people who are bullied prefer to not tell anyone which we all know isn't the right choice. http://www.rcpsych.ac.uk/mentalhealthinfo/mentalhealthandgrowingup/bullyingandemotion.aspx Socio-economic: Income, money is always a problem when there's not enough of it, Money will always have an impact on people's lives, In the UK there are millions of people still living in poverty, even with all the benefit schemes in place. ...read more.

If an adult smokes or drinks they are lowering the lung capacity and heightening the risk of cancer. Intellectually: It may persuade you to go to work or get a job in the first place, due to you mood and how much you like to socialise with people. Most people who are doing more "manual" jobs are more likely to smoke rather than those who work in offices and so on. Emotionally: Diets aren't all that bad; they can improve your moods and make you feel great about yourself, but they can also do the opposite if you can't lose the weight that you want to. Adults and teenagers are getting similar in terms of dieting, most adult want to look good and teenagers are now starting to read the media and become anxious about how they look. Socially: You may also socialise a lot more than usual as well especially if you go to gyms on a regular basis, you're bound to meet new people and make friends. Even though it's bad for your health, smokers are more likely to meet new people due to the smoking ban and having to go outside. ?? ?? ?? ?? Eleanor Lees ...read more.

This report is all about the affects that 5 lifestyle factors can have on the each area of the PIES. The report does meet the demands of the title, however there should be more depth in each area of the PIES. using positive and negative affects would have been a good way to gain a higher mark in this assignment. The explanations of each life factor are clear and focused which is a strength of this assignment. To improve the content of this report more depth into the affects on the PIES needs to be researched
***