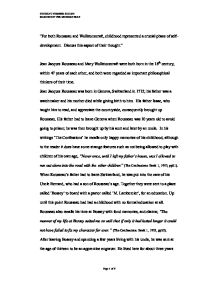 &quot;For both Rousseau and Wollstonecraft, childhood represented a crucial phase of self-development. Discuss this aspect of their thought.&quot;

"For both Rousseau and Wollstonecraft, childhood represented a crucial phase of self-development. Discuss this aspect of their thought." Jean Jacques Rousseau and Mary Wollstonecraft were both born in the 18th century, within 47 years of each other, and both were regarded as important philosophical thinkers of their time. Jean Jacques Rousseau was born in Geneva, Switzerland in 1712; his father was a watchmaker and his mother died while giving birth to him. His father Isaac, who taught him to read, and appreciate the countryside, consequently brought up Rousseau. His father had to leave Geneva when Rousseau was 10 years old to avoid going to prison; he was then brought up by his aunt and later by an uncle. In his writings 'The Confessions' he recalls only happy memories of his childhood, although to the reader it does have some strange features such as not being allowed to play with children of his own age, "Never once, until I left my father's house, was I allowed to run out alone into the road with the other children" (The Confessions: Book 1, 1953, pp21). When Rousseau's father had to leave Switzerland, he was put into the care of his Uncle Bernard, who had a son of Rousseau's age. Together they were sent to a place called 'Bossey' to board with a pastor called 'M. ...read more.

and Stage five - Adulthood (Twenty to Twenty Five years)." (www.infed.org) The books that are most fundamental to Rousseau's belief of childhood being a crucial phase of self-development are books one, two and three. Rousseau attempts to show the reader how a persons self-development can be determined by the way he is educated in his childhood. Rousseau's belief that society was corrupt fuelled his ideas on education. Geraint Parry mentions in 'Emile: Learning to be Men, Women, and Citizens' that "The significance of education for Rousseau is that it seems to offer a means of solving one of the central dilemmas of his social and political thought. A fundamental objective is to create a virtuous circle in which transformed human beings could live in a transformed society..." (The Cambridge Companion to Rousseau, 2001,pp248) Rousseau says in book one of 'Emile': "We are born sensitive and from our birth onwards we are affected in various ways by our environment. As soon as we become conscious of our sensations we tend to seek or shun the things that cause them, at first because they are pleasant or unpleasant, then because they suit us or not, and last because of judgements formed by means of the ideas of happiness and goodness which reason gives us." ...read more.

(A Vindication of the Rights of Woman, Penguin 1992, pp272), Wollstonecraft is trying to reiterate that to have any hope of being a good effective mother, a woman must be in possession of good sense and have her own mind. A woman must also be independent from her husband, Wollstonecraft felt that if a woman relied too much on her husband it would effect her abilities as a mother, this is backed up by what she states later in the chapter; "Meek wives are, in general, foolish mothers; wanting their children to love them best, and take their part, in secret, against the father, who is held up as a scarecrow." (A Vindication of the Rights of Woman, Penguin 1992, pp272). In conclusion it is clear to see from both Jean-Jacques Rousseau's and Mary Wollstonecraft's writings that they both believed that childhood was a crucial phase in a person's self-development. It was important for them to try to relate their beliefs to the general public which is why they emphasise it in their books, and also the reason that they write about it so successfully is because of their own personal experiences in their own childhood which seems to have provided them with a solid base to work upon in their adult life. ...read more.