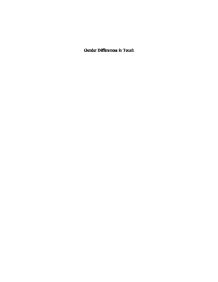 Gender Differences in Touch Abstract The following study was designed to assess the appropriateness of touching within family members, what is perceived as appropriate touch and what is perceived as inappropriate touch. Participants were 10 females and 10 males, ranging in ages from 31 years old to 55 years old. All participants were parents with both gender children above the age of 4 years. Different types of touch were rated on a scale from 1 to 5, 1 being very inappropriate and 5 being very appropriate. Rating two different age groups, 3 years and 8 years of age, in relation to the gender of the children, and the gender of the adults touching the children. The study suggests that parent/child touching is seen as quite acceptable through both age groups, becoming less appropriate for cross gender as the child's age increases. Mothers being more appropriate then fathers, as the child's age increases. Culture, race, socioeconomic status, and martial status were not considered in this study. Gender Differences in Touch Sexual Abuse has had a high degree of exposure over the years. Though the education provided to parents and children about the prevention of sexual abuse has been crucial, unfortunately it could be seen to confuse parents about the appropriateness of touch. ...read more.

This study was conducted using the survey method. It is hypothesized that this study replicates that of Harrison-Speake et al. (1995), suggesting significant norms for bathing, lap-sitting, sleeping and kissing, approval ratings declining as child increases in age. Mothers touch should be more approved of as the child ages rather then the fathers. Method Participants Participants were ten females between the ages of 34 years to 50 years old, all mothers, and ten males between the ages of 31 years to 55 years, all fathers. All participants had at least one child of each sex. The participants were residents of a small country town. Design The independent variable was the types of touch, and the dependant variable was the rated level of appropriateness of the touch. Materials and Procedure. The participants were asked for their help in filling out a questionnaire for the benefit of a student completing an assignment in psychology. The study was completely anonymous. Names, ages, or gender was not recorded. An explanatory statement about the study was first given to each participant to read, followed by a consent form to read and sign. A one page questionnaire describing different types of touching within the family, including a scale of 1 to 5 of appropriateness of different types of touch. ...read more.

There was no difference between the mother kissing the daughter and the father kissing the daughter as the child's age increased. The results on sleeping did not reflect the norms as the other results did. It was hypothesized that as the child's age increased, the rate of appropriateness for sleeping with parents at age 8 would decrease with both genders at much the same rate. The results clearly indicated that the rate of appropriateness of child sleeping with parents at age 8 decreases, however more so with the daughter sleeping with the parents then the son. This study was conducted by selecting adults with the following set criteria; equal amount of females to males, all being parents with children of both the sexes and ages investigated (3 and 8 years). To clearly determine the appropriateness of touch among family members, it was felt necessary to explore the feelings of parents and their attitudes of touch within the family home. As the results clearly indicated, the difference between ages, although significant, was slight. It was suggested that using a sample from a small country town, family interaction could be seen to be the norm. Parents are continuing to cuddle and playfully touch their siblings when their siblings are adults. Small country towns could be more resilient to population norms, and less threatened with social norms. This is an area of interest, which could lead to possible future research. ...read more.