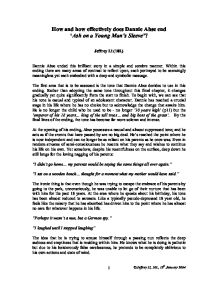 How and how effectively does Dannie Abse end 'Ash on a Young Man's Sleeve'?

How and how effectively does Dannie Abse end 'Ash on a Young Man's Sleeve'? Jeffrey Li (10L) Dannie Abse ended this brilliant story in a simple and sombre manner. Within this ending there are many areas of contrast to reflect upon, each portrayed to be seemingly meaningless yet each embodied with a deep and symbolic message. The first area that is to be assessed is the tone that Dannie Abse decides to use in this ending. Rather than adopting the same tone throughout this final chapter, it changes gradually yet quite significantly from the start to finish. To begin with, we can see that his tone is casual and typical of an adolescent character. Dannie has reached a crucial stage in his life where he has no choice but to acknowledge the change that awaits him. He is no longer the child who he used to be - no longer '10 years high' (p11) but the 'emperor of his 18 years... king of the tall trees... and big boss of the grass'. By the final lines of the ending, the tone has become far more solemn and intense. At the opening of his ending, Abse possesses a casual and almost suppressed tone; and he acts as if the events that have passed by are no big deal. He's reached the point where he is now independent and can no longer be as reliant on his parents as he once was. Even in random streams of semi-consciousness he resents what they say and wishes to continue his life on his own. ...read more.

into the summer evening... I kicked the notices over." (p16) The change is an emphasis of the change in Dannie's view towards the real world. While he was a child, he viewed it as a place of innocence and freedom. Now that he has grown up, it has transformed into the new stage on which he will perform the next episode of his life. He now sees the 'park' from a different perspective: "It seemed less like a park since they had taken down the iron railings..." "Not one lingering cry of a child playing in the park." What is so intriguing about the style Dannie Abse uses in these last two pages is the powerful effect that he manages to achieve through a rather solemn style. The vivid description of the atmosphere not only provides the reader with a distinct image of the present, the subtle contrasts that Abse uses also gives echoing flashbacks that are reminiscent of Dannie's past. The various deep meanings that are held within these last two pages entice and make the reader want to read the whole book all over again. This entire story is about Dannie's childhood and all of the changes that have occurred since his young years. At the beginning of the story, we can see by the expressions of innocence in his writing that Dannie has not yet tasted the hardship of what awaits him beyond his safe shell. As the tale progresses, we can see that the outside world is slowly etching itself into the Dannie's life. ...read more.

Their descent was a cry of longing; they looked up yearningly at the braches from which they fell - not wishing to go." This quotation metaphorically describes leaves as a symbol of humans dying while fighting for their country in the war. In his typical poetic, double-meaning and subtly contrasting style, Dannie Abse vividly illustrated his transition from child to adult as well as many other things associated with this change. What was once a juvenile and innocent child has come of age, and he has reluctantly yet bravely departed from his segregated shell into the vast plains of the wide world that now lies ahead in front of him. There are many other examples like this throughout the entire book. "Like hands they dropped, yellow khaki hands, cold red hands sinking in the air... waving goodbye, to the branches that, already in our war weather ached with their absence." The ending has not only strongly reiterated Dannie's significant events of the past but also emphasised just how much he has changed since the beginning of the book. Dannie's more subtle form of speech and enrichment of his poetic style is an epitome of his development. This episode of his 18th birthday paints the final picture of his childhood and concludes the book in a very successful manner. This is a terrific ending to a very unique book that has managed to attain the ideal portrayal of adolescence and infancy rounded off in a very intense but open-ended manner. I really don't think even the writer himself could have ended the story in a better manner than the way he did. 1 (c) Jeffrey Li, 10L, 18th January 2004 ...read more.