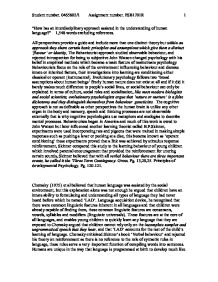 &quot;How has an interdisciplinary approach assisted in the understanding of human language

"How has an interdisciplinary approach assisted in the understanding of human language?" 1,548 words excluding references. All perspectives provide a guide and include more than one distinct theory but within an approach they share certain basic principles and assumptions which give them a distinct 'flavour' or identity, The Behaviourist approach studied observable behaviour, and rejected introspection for being to subjective John Watson changed psychology with his belief in empirical methods which became a main feature of mainstream psychology. Behaviourists focus on the role of the environment influencing behaviour and dismiss innate or inherited factors, their investigations into learning are conditioning either classical or operant [instrumental]. Evolutionary psychology follows two 'broad assumptions about human beings' firstly human nature does not exist at all and if it did it barely makes much difference to people's social lives, or social behaviour can only be explained in terms of culture, social roles and socialization, like most modern biologists and social scientists, evolutionary psychologists argue that 'nature or nurture' is a false dichotomy and they distinguish themselves from behaviour geneticists. The cognitive approach is not as definable as other perspectives the human brain is unlike any other organ in the body and memory, speech and thinking processes are not observable externally that is why cognitive psychologists use metaphors and analogies to describe mental processes. ...read more.

same, then one of the beakers of water are poured into a third beaker which is different in shape, the water level changes to either higher or lower, but the child is unable to account for the height or width that has now altered. When the same procedure is reversed and the water is poured back into the original jar the pre-school child cannot understand that the level of water will again be the same. Vygotsky has a different approach in cognitive development he believed that social interaction was very important in the development of thought and language. He recognized that language was very social and that children intend to communicate from the beginning, and that language and thought develop simultaneously, each having an influence upon the other. The adult/child relationship begins to move towards an inner dialogue and then on to verbal thought. The child begins to understand the adult within its non-verbal context coupled with the adult's intentions. This is the basis which forms a basic understanding of the speech which in turn helps the child's behaviour. In this way the child can control the relationship it has with the adult and the child learns to solve problems unaided. ...read more.

others actions, we continuously look at the body language the facial expressions how we speak and what we have to say which all contribute to the overall impression that we see. Sometimes this can be seen through when our speech says one thing and our body language belies something else. We can not always keep up our impressions and mistakes appear in our performances which affects how others view us. Goffman has used a clever analogy with social behaviour and acting on stage although there is a big difference between acting and real life; scripts are planned and rehearsed whereas human action is far more spontaneous and people tend to act out more in habit, and only when an important or special occasion approaches are we more likely to put on a better impression. {Ibid} Pg17, 679-680. This discussion has centered on the different theoretical approaches within psychology and sociology and how all the disciplines have helped our understanding of human beings and their relationship to language, there have been some important similarities between different approaches but all of them have made a contribution whether we accept them or not, but it goes a long way to explaining the many diversities which accompany a complex subject such as language. Gross. Pg.27. ...read more.