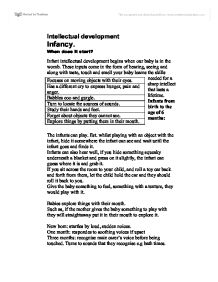 Intellectual development Infancy. When does it start? Infant intellectual development begins when our baby is in the womb. These inputs come in the form of hearing, seeing and along with taste, touch and smell your baby learns the skills needed for a sharp intellect that lasts a lifetime. Infants from birth to the age of 6 months: Focuses on moving objects with their eyes. Has a different cry to express hunger, pain and anger. Babbles coo and gurgle. Turn to locate the sources of sounds. Study their hands and feet. Forget about objects they cannot see. Explore things by putting them in their mouth. The infants can play. Est. whilst playing with an object with the infant, hide it somewhere the infant can see and wait until the infant goes and finds it. Infants can also hear well, if you hide something squeaky underneath a blanket and press on it slightly, the infant can guess where it is and grab it. If you sit across the room to your child, and roll a toy car back and forth from them, let the child hold the car and they should roll it back to you. ...read more.

School encourages children to make up stories and poems to show of their imaginations. Children that are school age only see things from one point of view sometimes this happens in infancy as well. Children at the age of 4 + feel good in them selves if they do something right. They can start writing their own sentences at the age of just 6 +. Can understand the order of daily routines. Can count objects out loud, but sometimes not in the right order. Can adapt languages easily. Continues the same activity to 10 - 15 minutes. Children don't think logically. Sometimes they think they are doing the right thing, when their not. Children can only sometimes use limited logic when they think about the same thing for to long. Children from just an early age can understand what their mother or father is saying to them. Children do a great deal off learning from the ages of 4- 11 years old. As a child your muscles start to work more formally. You start recognising familiar faces. ...read more.

But yet the more experience the adults have the better they are at solving problems and making decisions. Adulthood seem to have more concerntration than any of the other life stages. Slow intellectual skills in childhood can follow through to your adulthoods. In adulthood you have different ways of expressing yourself. Some people just take opinions on people. Some adults come across as rude. Adulthood is the time you express how you feel and put it in words. People have rated adulthood the best time of their lifes. That so much happens and you learn much more in adulthood. Later Adulthood Intellectual changes in late adulthood do not always result in reduction of ability. While fluid intelligence does decline in later years, crystallized intelligence has been shown to rise slightly over the entire life span The elderly tend to lose their memerory and become more self conscious. Some elderly people even forget their kids. The later adulthood is one of the stages where your mind shuts down, sometimes it can be caused by an illness that cannot be helped, or sometimes it is just caused by old age. If the elderly remember back to when they were young, I bet they have some amazing stories to tell... ...read more.