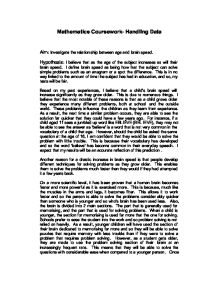 Investigate the relationship between age and brain speed.

Mathematics Coursework- Handling Data Aim: Investigate the relationship between age and brain speed. Hypothesis: I believe that as the age of the subject increases so will their brain speed. I define brain speed as being how fast the subject can solve simple problems such as an anagram or a spot the difference. This is in no way linked to the amount of time the subject has had in education, and so, my tests will be fair. Based on my past experiences, I believe that a child's brain speed will increase significantly as they grow older. This is due to numerous things. I believe that the most notable of these reasons is that as a child grows older they experience many different problems, both at school and the outside world. ...read more.

However, should the child be asked the same question at the age of 16, I am confident that they would be able to solve the problem with little trouble. This is because their vocabulary has developed and so the word 'believe' has become common in their everyday speech. I expect that my results will be an accurate reflection of this prediction. Another reason for a drastic increase in brain speed is that people develop different techniques for solving problems as they grow older. This enables them to solve the problems much faster than they would if they had attempted it a few years back. On a more scientific level, it has been proven that a human brain becomes faster and more powerful as it is exercised more. ...read more.

When a child is younger, the section for memorising is used far more that the one for solving. Schools prefer to ease the student into the work and so problem solving is not relied on heavily. As a result, younger children will have used the section of their brain dedicated to memorising far more and so they will be able to solve puzzles that require memory with less trouble than if they were to solve a problem that requires problem solving. However, as a student gets older, they are made to use the problem solving section of their brain at an increasingly frequent rate. This means that they will be able to solve the questions with considerable ease when compared to a younger person. Once again, this supports my prediction that a child's brain speed will increase with age. ...read more.