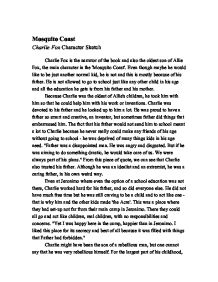 Mosquito Coast Charlie Fox Character Sketch Charlie Fox is the narrator of the book and also the oldest son of Allie Fox, the main character in the 'Mosquito Coast'. Even though maybe he would like to be just another normal kid, he is not and this is mostly because of his father. He is not allowed to go to school just like any other child in his age and all the education he gets is from his father and his mother. Because Charlie was the oldest of Allie's children, he took him with him so that he could help him with his work or inventions. ...read more.

"Father was a disappointed man. He was angry and disgusted. But if he was aiming to do something drastic, he would take care of us. We were always part of his plans." From this piece of quote, we can see that Charlie also trusted his father. Although he was an idealist and an extremist, he was a caring father, in his own weird way. Even at Jeronimo where even the option of a school education was not there, Charlie worked hard for his father, and so did everyone else. He did not have much free time but he was still craving to be a child and to act like one - that is why him and the other kids made 'the Acre'. ...read more.

Charlie might have been the son of a rebellious man, but one cannot say that he was very rebellious himself. For the largest part of his childhood, he was under his fathers 'rule' and he would not really express any opinions of his own. Although his father suppressed many of his needs as a child, like school and generally a normal life, he never stood up for himself and tells his father what he really felt. Charlie was definitely a loving and devoted son to his father, but maybe sometimes his father only looked at him as a helper and someone who would continue what he had started, rather than a son. ...read more.