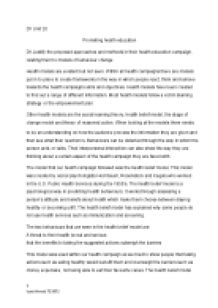 Overall four health models have been justified and evaluated in whether they are able to explain the way people behave. Looking at the reaction we got from our posters the health belief model relates the most

﻿D1 Unit 20 Promoting health education D1 Justify the proposed approaches and methods in their health education campaign, relating them to models of behaviour change Health models are existent but not seen. Within all health campaigns there are models put in to place to create frameworks in the way in which people react, think and behave towards the health campaigns aims and objectives. Health models have been created to find out a range of different information. Most health models follow a victim blaming strategy or the empowerment plan. Other health models are the social learning theory, health belief model, the stage of change model and theory of reasoned action. When looking at the models there needs to be an understanding on how the audience process the information they are given and then see what their reaction is. Behaviours can be detected through the way in which the person acts, or talks. Their interpersonal interaction can also show the way they are thinking about a certain aspect of the health campaign they are faced with. The model that our health campaign followed was the health belief model. This model was created by social psychologists Hochbaum, Rosenstock and Kegels who worked in the U.S. Public Health Services during the 1950?s. The health belief model is a psychological way in predicting health behaviours. It works through assessing a person?s attitude and beliefs about health which make them choose between staying healthy or becoming unfit. The health belief model has explained why some people do not use health services such as immunization and screening. ...read more.

Through creating our small scale campaign interlinked with the health belief model it was easy for us to understand and see what individuals where thinking and easy ways in changing their behaviours and understanding about living a healthy lifestyle. For example people who behaved in a way of being perceived to susceptibility in other words people who do not feel affected by the issue due to them not yet have the problems. We were able to change their way of thinking and behaving through the acceptance of perceived benefits. This is where we would educate them and change their train of thought. The health belief model has proven to be the most effective approach in helping us carries out our health campaign because it was easy to pin point and change behaviours. Whereas other health belief models such as the social learning theory are not as productive to be used within our small scale health campaign. The social learning theory follows three different accepts that are believed to determine a person?s behaviour. Cognitive, environmental, behavioural factors. This approach fits very closely to the actions people take in relation to health. As the environment and social context do have a big responsibility in shaping peoples behaviours. However there are also genetic aspects that need to be evaluated within health. Therefore this health model did not fulfil all the criterions need to justify the proposed act. The social learning theory is also very vague on explaining the difference within people. ...read more.

The review of this research proved that more then on intervention needs to be in place for individual to be able to reach a potential goal in relation to health and overall life. All the health models will have their strengths and weakness. They all state ways in which people, act, behave, react and attitude that enable them to make important decisions about there health. The public health online: 2009 have stated that the four models mentioned above are the most used in determining societies ways of acknowledging health education campaigns. In relation to our small scale health campaign we as a group close to follow the health belief model due to it being able to cover all the aspects from people wanting to change but not having the motivation or people who could not see they need to change. Overall seeing that a majority of individuals do need a cue to action a forceful push that helps them on achieving there goals and intentions. Overall four health models have been justified and evaluated in whether they are able to explain the way people behave. Looking at the reaction we got from our posters the health belief model relates the most in terms of the comments we received from our audience. Health education will also be seen within society and all the health models fit within each other as human behave and choose to follow different oaths however they are all able to achieve the same gaols. ...read more.