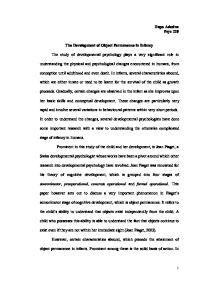 The development of object permanence in infancy.

Dapo Adesina Psyc 220 The Development of Object Permanence in Infancy The study of developmental psychology plays a very significant role in understanding the physical and psychological changes encountered in humans, from conception until adulthood and even death. In infants, several characteristics abound, which are either innate or need to be learnt for the survival of the child as growth proceeds. Gradually, certain changes are observed in the infant as she improves upon her basic skills and conceptual development. These changes are particularly very rapid and involve several variations in behavioural patterns within very short periods. In order to understand the changes, several developmental psychologists have done some important research with a view to understanding the otherwise complicated stage of infancy in humans. Prominent in this study of the child and her development, is Jean Piaget, a Swiss developmental psychologist whose works have been a pivot around which other research into developmental psychology have revolved. Jean Piaget was renowned for his theory of cognitive development, which is grouped into four stages of sensorimotor, preoperational, concrete operational and formal operational. This paper however sets out to discuss a very important phenomenon in Piaget's sensorimotor stage of cognitive development, which is object permanence. ...read more.

Consequently, the infant at eight months of age commences the stage whereby, the co-ordination of actions is now possible. This stage lasts till she is twelve months old and involves a combination of several events aimed at co-ordination. Activities at this stage include grasping an object with one hand and trying to grasp another with the other hand. Prior to this stage, this action of co-ordination would have been impossible for the infant. The form which object permanence takes in this phase of the development is such that is possible for the infant to search for a completely hidden object and not a partially hidden one like the example with the secondary circular reactions stage. The infant, who had seen an object earlier on, has the ability to search for it when it has been completely hidden beyond view. This is not so with the secondary stage whereby there needs to be a clue, like, a part of the hidden object in order for it to be searched for. The problem at this stage can be referred to as the A Not-B error. Though she is able to search for a completely hidden object, the infant however has not developed the object concept fully and can only search where the object had been initially and no other place; even if she saw it moved to the new location. ...read more.

279-280). Consequently, object concept was proposed for these four-year-olds, quite different from Piaget's proposal. Piaget suggests that the first real notions of object permanence begin at about eight months, when the infant can go in search of an object, which is completely hidden, provided she had seen it before. Baillargeon however also observed that six-and -a half months old children would reach in the dark for an object which they had seen previously (Renee Baillargeon, 1987). This is also different from what Piaget suggests at that stage of development because, objects in the dark can be regarded as totally hidden, yet the child still reaches out to them. Developmental psychology has therefore come of age, with new discoveries, theories and concepts, making significant impacts. The contribution of Baillargeon on the concept of object permanence therefore remains quite significant, without any bias about the existing concept by Piaget. As far as the object concept is concerned, the ages attributed to the development of these developmental concepts such as object permanence remain a controversial issue. Piaget's work and consequent theory, though remain the bedrock of advancement in developmental psychology, significant contributions and discoveries such as Baillargeon's will continue to go a long way in improving existing knowledge of the child. ...read more.