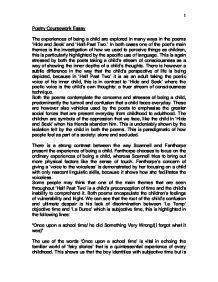 The experiences of being a child are explored in many ways in the poems 'Hide and Seek' and 'Half-Past Two.'

Poetry Coursework Essay The experiences of being a child are explored in many ways in the poems 'Hide and Seek' and 'Half-Past Two.' In both cases one of the poet's main themes is the investigation of how we used to perceive things as children, this is particularly highlighted by the specific use of language. This is again stressed by both the poets taking a child's stream of consciousness as a way of showing the inner depths of a child's thoughts. There is however a subtle difference in the way that the child's perspective of life is being depicted, because in 'Half Past Two' it is as an adult taking the poetic voice of his inner child, this is in contrast to 'Hide and Seek' where the poetic voice is the child's own thoughts: a truer stream of consciousness technique. Both the poems contemplate the concerns and stresses of being a child, predominantly the turmoil and confusion that a child faces everyday. These are however also vehicles used by the poets to emphasise the greater social forces that are present everyday from childhood to adulthood. The children are symbols of the oppression that we face, like the child in 'Hide and Seek' when his friends abandon him. This is undeniably shown by the isolation felt by the child in both the poems. This is paradigmatic of how people feel as part of a society: alone and secluded. ...read more.

Fanthorpe presents the experience of being a child in the form of everyday experiences like detention. Fanthorpe shows that the child has experienced something more magical than an adult can understand because they are ruled by time. This is however overshadowed by the negative overtones which focuses on the god-like power placed on some mortals over others. I feel that the ending in 'Half past two' is a both positive and negative. The ending is rather nostalgic and this is seen by the use of precise words: "But he never forgot how once by not knowing time/ He escaped into the clockless land of ever/ Where time hides tick-less waiting to be born. This feeling of reminiscence is shown by the use of the words 'he never forgot.' The ending is particularly affirmative as it shows the happiness felt by the boy as his imagination runs wild and he eludes time into the 'clockless land of ever.' Nevertheless the last sentence hides a much more unfathomable meaning, about society and the world, because it shows life 'tick less waiting to be born,' emphasising the point that we are born physically but not spiritual. This momentous image of pregnancy encourages us to feel that the boy's spiritual life has just begun. There are many similarities and differences between Scannell and Fanthrope; doubtlessly one of the foremost similarities between them is that they both concentrate profoundly on greater social forces. ...read more.

But where are they sought you? The desolation is particularly highlighted by the pathetic fallacy, which is highlighted by the words 'the sun is gone.' This is emphasised further by the pessimistic tone 'darkening garden watches.' The questioning tone of the final sentence creates a sense of uncertainty, which is all the greater because it is sudden and unexpected. This is a vast contrast to 'Half Past Two,' where the ending is much more serene and peaceful seen by the apologetic tone employed by the teacher in the end when see remarks 'run along or you'll be late.'' 'Hide and Seek' seems more pragmatic because it is from a child's perspective whereas the poetic voice in 'Half Past Two' is an adult filled with nostalgia. We can see that both poems show everyday prosaic experiences, which reflect something with far greater resonance. In 'Half Past Two' the boy is controlled by the oppressive force - She, who puts the boy in detention. However the message in 'Hide and Seek' is much darker, by using the game of 'Hide and Seek' to highlight the greater social evils that are present in modern day society. 'Hide and Seek' looks at the more cruel and harsh side of society where people are left alone to defend for themselves in 'blindness.' The anti-climax created in 'Hide and Seek' shows shattered dreams, spoilt optimism and more notably the bitter realisation that at the end of the day no one really cares. In 'Hide and Seek' the truth of abandonment is juxtaposed by the greater resonance of the darker social forces. 1 ...read more.