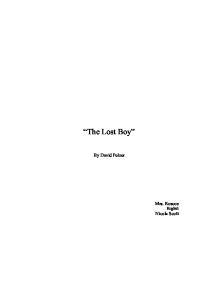 The Lost Boy By David Pelzer

"The Lost Boy" By David Pelzer Mrs. Roscoe English Nicola Scott "The Lost Boy" By Dave Pelzer. "The Lost Boy" which is the follow up sequel to "A child called 'it'" written by Dave Pelzer, tells the heart breaking story of a boy who just wants to be loved. He has been abused for years by his alcoholic mother and now, finally gets the chance to break free of her torture. This book is written in first person as it helps you to understand his perspective. During this report I will be covering real characters and an interesting plot. The characters in this book are based on real people in the author's life, although some names have been changed to protect their privacy. "Some of the names in this book have been changed in order to protect the dignity and privacy of others." The main character David has been abused ever since he can remember by his mum or as David refers to her "mother" Roerva, who is mentioned later. She has left David physically and mentally scared, but he won't let that get in his way at school as he is a very determined person and wants to do well. ...read more.

The plot of this story is mainly about the abuse that David suffered in his life and how his life changed as he grew up. David had been subjected to horrendous cruelty for years. He had only one thought that consumed his longsome days and nights and that was how to survive his unhappy life! "All I can do is try to imagine myself away somewhere, anywhere - but "the house." He plotted all sorts of things to enable him some kind of release from his daily torment, suffered at the hands of his cruel mother. Planning and timing were essential, if David was to have at least one chance of normality in his life. He would plan to steal some left over food from the family's lunch or supper (which he was always excluded from) while his mother was out shopping or when she had fallen asleep after a drinking binge. He was never allowed many things we take for granted like food, new clean clothes, a warm soft bed to sleep in. So David had always a plan to help himself achieve those things. ...read more.

Upon the first command I must look above her bust, but below her eyes. Upon the second command I must look into her eyes, but never, never may I speak, breathe or move a single muscle unless mother gives me permit ion to do so!" The way David tells us about the "game" is very serious; it is almost as if he is actually playing the "game" as he is telling it. The short sentence structure acts like lots of separate commands, and by him saying "I must ..." it gives me the idea that his mother would punish him if he disobeyed her! I thoroughly enjoyed this book because it lets me see just how lucky I am, and how unfortunate others can be who suffer from abuse of any kind. I liked the way the book was written as the vocabulary got better as David grew older which helps you understand the different stages of his life. From a child at primary school to a grown adult man attending college. As this is a sequel book I am looking forward to reading the next one "A man named Dave" to see how the story progresses. ...read more.