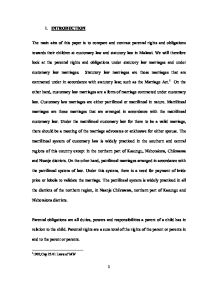 The main aim of this paper is to compare and contrast parental rights and obligations towards their children at customary law and statutory law in Malawi.

1. INTRODUCTION The main aim of this paper is to compare and contrast parental rights and obligations towards their children at customary law and statutory law in Malawi. We will therefore look at the parental rights and obligations under statutory law marriages and under customary law marriages. Statutory law marriages are those marriages that are contracted under in accordance with statutory law; such as the Marriage Act.1 On the other hand, customary law marriages are a form of marriage contracted under customary law. Customary law marriages are either patrilineal or matrilineal in nature. Matrilineal marriages are those marriages that are arranged in accordance with the matrilineal customary law. Under the matrilineal customary law for there to be a valid marriage, there should be a meeting of the marriage advocates or ankhoswe for either spouse. The matrilineal system of customary law is widely practiced in the southern and central regions of this country except in the northern part of Kasungu, Nkhotakota, Chikwawa and Nsanje districts. On the other hand, patrilineal marriages arranged in accordance with the patrilineal system of law. Under this system, there is a need for payment of bride price or lobola to validate the marriage. The patrilineal system is widely practiced in all the districts of the northern region, in Nsanje Chikwawa, northern part of Kasungu and Nkhotakota districts. Parental obligations are all duties, powers and responsibilities a parent of a child has in relation to the child. Parental rights are a sum total of the rights of the parent or parents in and to the parent or parents. A child is defined in a number of ways under Malawian law. Under the Constitution 2, a child has been defined as a person less than sixteen years of age. Under the Children and Young Persons Act,3 a child is any person under the age of fourteen years. Under the Adoption of Children Act, 4 a child is defined as a person less than twenty years of age. ...read more.

Likewise, affiliation affects the child's obligation in a similar way in that the child owes its obligations to its mother or its mother's clan and not to its father or to its father's clan. For instance, the child is under an obligation to render domestic services to its mother or its mother's relative in whose custody it is placed. At statutory law, where the custody of the child is granted to the father, under the Affiliation Act as stated above, the child will be affiliated to its father's clan and hence the child will owe his rights and duties to his father. Where the custody of the child remains with the mother, the child will be affiliated to her clan and he or she will owe the mother his rights and obligations. IV. RIGHTS AND OBLIGATIONS TOWARDS THE ADOPTED CHILD Adoption is the process by which the legal relationship between a child and his natural parents is severed and re-established between the child and a third party or parties.65 It is impossible to adopt a child without a court order. A mere agreement whereby a parent seeks to transfer his rights and duties to someone else in ineffective for this purpose. THE LAW OF ADOPTION UNDER THE ADOPTION OF CHILDREN ACT In Malawi, the institution of adoption is wholly a statutory creation. It is created by the Adoption of Children Act.66 The law of adoption as stipulated in the Act as to who may adopt a child is that any person may be authorized by a court order to adopt the infant so long as he is over twenty-five years67 and not less than twenty-one years older than the infant in respect of whom the application is made.68But where the applicant and the infant are within the prohibited degrees of consanguinity, the court may, if it thinks fit, make an adoption order notwithstanding that the applicant is less than twenty-one years older than the infant.69However, a sole male applicant will not be allowed to ...read more.