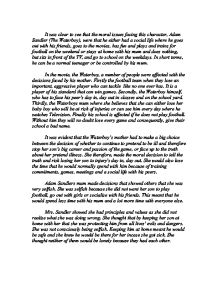 The Waterboy - Review of the character Adam Sandler.

It was clear to see that the moral issues facing this character, Adam Sandler (The Waterboy), were that he either had a social life where he goes out with his friends, goes to the movies, has fun and plays and trains for football on the weekend or stays at home with his mum and does nothing, but sits in front of the TV, and go to school on the weekdays. In short terms, he can be a normal teenager or be controlled by his mum. In the movie, the Waterboy, a number of people were affected with the decisions faced by his mother. Firstly the football team when they lose an important, aggressive player who can tackle like no one ever has. ...read more.

It was evident that the Waterboy's mother had to make a big choice between the decision of whether to continue to pretend to be ill and therefore stop her son's big career and passion of the game, or face up to the truth about her pretend illness. She therefore, made the moral decision to tell the truth and risk losing her son to injury's day in, day out. She would also lose the time that he would normally spend with him because of training commitments, games, meetings and a social life with his peers. Adam Sandlers mum made decisions that showed others that she was very selfish. She was selfish because she did not want her son to play football, go out with girls or socialise with his friends. ...read more.

Adam's mother initially made the decision to stop Adam's social life but could see how happy and content he was while he was playing football. She was able to see how many good friends he made and how much they meant to him. She could also see by allowing Adam to have a girlfriend, he looked happy and secure and knew it was the right thing to do. Yes, the character did make responsible decisions because after seeing Adam alone, not playing football, not having any friends, not socialising and spending all his spare time looking after his mum, Mrs. Sandler could see that allowing Adam to play football, have friends, in particular a girlfriend and have a social life, he was still the same person. He still loved his mum as much as before and was still there when she needed him. Mrs. Sandler definitely made the right decision. ...read more.