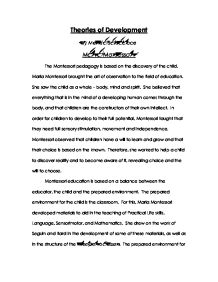 Theories of Development By Melisa Santacroce Maria Montessori The Montessori pedagogy is based on the discovery of the child. Maria Montessori brought the art of observation to the field of education. She saw the child as a whole - body, mind and spirit. She believed that everything that is in the mind of a developing human comes through the body, and that children are the constructors of their own intellect. In order for children to develop to their full potential, Montessori taught that they need full sensory stimulation, movement and independence. Montessori observed that children have a will to learn and grow and that their choice is based on the known. Therefore, she worked to help a child to discover reality and to become aware of it, revealing choice and the will to choose. Montessori education is based on a balance between the educator, the child and the prepared environment. The prepared environment for the child is the classroom. For this, Maria Montessori developed materials to aid in the teaching of Practical Life skills, Language, Sensorimotor, and Mathematics. She drew on the work of Seguin and Itard in the development of some of these materials, as well as in the structure of the three-period lesson. The prepared environment for the child is meant to be comfortable to the child and flexible enough to adapt to the individual needs and will of each student. ...read more.

Each developmental stage has a specific purpose for the child's construction of his own intelligence. In this way, although Piaget didn't write specifically on education, his theories support the philosophy of auto-education, as is seen in Montessori schools. Piaget broke the human learning process into a series of seven stages: Exploration, imitation, representation, organization, memorization, symbolization and creation. Each of the previous steps must be present for the creative stage to take place - the stage where problem solving, imagination and ingenuity come into play. According to his theory, cognitive growth only occurs when a child goes through each of the seven stages of learning, therefore constructing his own knowledge. Research has supported Piaget's stage theory, but has been less supportive of the idea of generality of Piaget's stages. Children may exhibit some cognitive skills of many different stages at once, and may attain them in a different order than Piaget theorized. Other research has shown that Piaget may have underestimated the capacity of children to understand certain concepts. Different ways to test a child's understanding of a certain concept have produced different results. Piaget's theories of cognitive development are the inspiration for many other theorists, whether they agree with him or disagree. His theories formed the basis for the field of developmental psychology and continue to be studied and challenged. ...read more.

Erikson takes Freud's stage theory farther when he wrote of the "Intimacy vs. Isolation" stage of human development in young adulthood. In this phase of life, the individual seeks to understand the implications of intimacy with another human being. As they move farther into middle adulthood, they enter the "Generativity vs. Self-absorption and stagnation" stage, a period of producing offspring, of becoming involved in their chosen career and making a life for themselves and their family. The final stage that Erikson writes of is approached in old age and is referred to as the "ego integrity vs. despair" stage. This is another period of intense inner struggle, in some ways similar to that of adolescence. The body is once again going through great physical change, and the human psyche is put to the test as it faces it's own mortality. Erikson's stages of human development have been very influential in the field of developmental psychology, but have been challenged over the years. Some psychologists, such as Carol Gilligan, have argued that Erikson's stage theory is too vague and general for describing the complicated development of each individual. His stages are difficult to test in a scientific way because of this vagueness. His theory did, however, bring to light the importance of identity development in the human, and continues to be included and valued amongst developmental psychology's base of initial thought on human development. Reference: Theories of Development: Concepts and Applications by William Crain, Fourth edition, Prentice Hall, New York, 2000. ...read more.