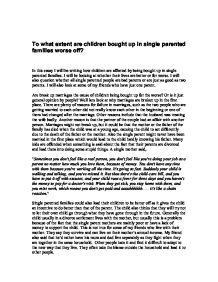 To what extent are children bought up in single parented families worse off?

To what extent are children bought up in single parented families worse off? In this essay I will be writing how children are affected by being bought up in single parented families. I will be looking at whether their lives are better or for worse. I will also question whether all single parented people are bad parents or are just as good as two parents. I will also look at some of my friends who have just one parent. Are break up marriages the cause of children being bought up for the worse? Or is it just general opinion by people? Well lets look at why marriages are broken up in the first place. There are plenty of reasons for failure in marriages, such as the two people who are getting married to each other did not really know each other in the beginning or one of them had changed after the marriage. ...read more.

Also the single parent might never have been married in the first place which would lead to the child hardly knowing his father. Many kids are offended when something is said about the fact that their parents are divorced and lead them into doing some stupid things. A single mother said, "Sometimes you don't feel like a real person, you don't feel like you're doing your job as a parent no matter how much you love them, because of money. You don't have any time with them because you're working all the time. It's going so fast. Suddenly your child is walking and talking, and you've missed it. But then there's the child-care bill, and you have to put it off with excuses, and your child runs a fever for three days and you haven't the money to pay for a doctor's visit. ...read more.

Generally the child usually in a divorce settlement lives with the mother, but usually this is a problem because of the fact that the single parent mothers are mainly poor or have a lack of money to support the child. This is not true for some of my friends who live with their mother. They say they survive and can live on their mother's annual income. My friend also said that he'd rather have his mum and dad live separately as they fight when they are together in the same household. Other people hate it and find it difficult to adapt to the new way that they live. They often take the blame outside the household and lead it to other people. "The best thing about being a single parent is that there's no interference, or at least less interference, from the other parent in raising the child," ?? ?? ?? ?? ...read more.