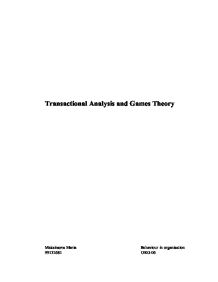 Transactional Analysis and Games Theory Maksimova Maria Behaviour in organisation 99132681 ORG-06 Contents Introduction 3 Structural Analysis 4 Transactional Analysis 4 Types of Games 5 Situation 5 References 8 Bibliography 8 Introduction Transactional analysis is described by the ITAA (International Transactional Analysis Association) as "a theory of personality and a systematic psychotherapy for personal growth and personal change". TA is a set of theories and techniques. The broad timetable for development of TA concepts was: 1955-1962 ego states 1962-1966 transactions and games 1966-1970 script analysis (Hay, p.2) In general Berne's theory (1964) outlines the importance of social intercourse for people's time-structuring, which is vital from biological side - in order to stimulate human's brain for mental health; the most gratifying examples of these are games and intimacy. After the period of the close intimacy with the mother the individual for the rest of his life strives for its attainment - there are biological, social, psychological forces, which stand in the way of physical intimacy in the infant style. It is possible in a form of compromise, a person learns to do with more subtle, symbolic forms of handling. This process of compromise can be called sublimation, it results in transforming from the infantile stimulus-hunger to the recognition-hunger. "Stroking" is used as a general term for intimate physical contact, in practice it can appear in different forms. ...read more.

...' This one is common in family relations(two-handed game, a spouse).At work, convention often prevents this game being played 'live', but it may well be rehearsed inwardly or to a colleague: 'If the boss hadn't had it in for me, I could have been running Area X by now'. * 'Why don't you ...'; 'Yes, but ...' (many-handed game). Other Games include 'You got me into this', 'There I go again', and 'Why don't you and he fight?' (three-handed game). For games analysis Berne proposes following methodology: defining Thesis, Aim, Roles, Dynamics, Examples (an illustration of the game as played in childhood + an illustration from adult life), Paradigm (critical transactions at the social and psychological levels), Moves (minimum number of transaction stimuli and transactional responses), Advantages, Relatives (complementary, allied, antithetical games). As Guirdham M. writes (p.11), at work, games inhibit effectiveness. Game analysis, therefore, according to Dave Barker 'represents a significant way of examining and dealing with dysfunctional relationships in organisations'. Certainly studying TA is one way of increasing awareness both of the self and of communications; in addition it provides a set of tools for motivating others: by addressing their Child, for instance, you may be able to stimulate their enthusiasm better than if you communicate only to their Adult, while by assuaging their Parent, some inhibitors to change can be removed. Finally, it can help you to achieve better work relationships if you, for instance, recognize that a 'Game' is about to begin, and counter with a pleasant stroke instead of a (temporarily) ...read more.

Antithesis - the contractual structure of a relationship with the NIGY player (an oragnisation lending money) should be explicitly stated in detail at the first opportunity, it's better in business situations to calculate all the risks before starting doing anything. Social paradigm - The woman's husband behaved himself like Adult: "Please help me, I've got a problem". And the woman also behaved as Adult: "Ok, we're going to resolve it together". Psychological Paradigm - Parent-Child. Parent: "You should obey me" Child: "OK, daddy, I'll do it" (innocent, not rational reaction) Moves (Transactional Paradigm) 1. Provocation- not recognizing it, blind Obeyance. 2. Defence-Accusation. 3. Defence-Punishment. 4. Punishment- Penance. Advantages * Internal Psychological - justification for own lack of action and consideration, weaknesses. * Internal Social - "Kick me". * External Psychological - avoiding confrontation of own deficiencies. * External Social - they're always out to get you. * Biological - belligerent exchanges. * Existential - people can't be trusted, everyone wants to deprive me. All these kinds of life games make the results for the parties like this - win/lose. Unfortunately, it's how it all constructed - Berne (p. 45) gives an example of classic insurance game - no matter what the agent appears to be doing in conversation, he is looking for or working on a prospect. Since the picture can be sophisticated due to the perconal issues such as happened in the case depicted above, it's better to be aware of roles, aims and games being played. ...read more.