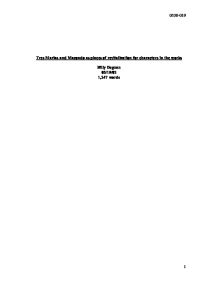 Tres Marias and Macondo as places of revitalization for characters in the works - In The House Of Spirits and One Hundred Years of Solitude are two books that use the place of habituation to develop themes and characters.

Tres Marias and Macondo as places of revitalization for characters in the works Billy Degnan 05/19/02 1,247 words Tres Marias and Macondo as places of revitalization for characters in the works In The House Of Spirits and One Hundred Years of Solitude are two books that use the place of habituation to develop themes and characters. Throughout these books, Macondo and Tres Marias are extremely similar in the event that happen in each place, also they both develop the theme of starting over. The main characters retreat to these towns to begin new lives and become new people, as the towns become new places. The towns and the characters and unraveled and motives are exposed. Esteban Trueba, a hard working, lonely, stern, Spanish man went trough many tragic events. Estebans life which should have gone quite smoothly, started to turn into a downward spiral of problems. The death of his first love and would be future wife, Rosa the Beautiful, put Esteban into a sever depression. He could not function nor get along with anyone following her death. His life was in ruins and he had to do something about it. Esteban had to get away from civilization. He moved out to a new rural home, Tres Marias. ...read more.

Esteban is also having new parts installed. New women are in his life and he has a new job (directing peasants). The sexual relations with the new women help Esteban forget about his loss of Rosa the Beautiful. At the end of Tres Marias and Estebans development, both overcome their problems. Tres Marias is now a beautiful fully restored structure that has a working class and a type of leader. Esteban is now a fully restored and rejuvenated person. Esteban is now able to handle the realities of civilization in his hometown. This is when Esteban goes in search of his future lover in which he pursues a marriage with Clara. Clara, Rosas sister, marries Esteban and has a fairly successful life together. Macondo, the village founded in One Hundred Years Of Solitude. Jose Arcadio founded this village. He needed to move away from all civilization and live in an isolated place. Jose was being haunted by the guilt and taunting from his long time friend Aguilar. Jose was being mocked and ridiculed because he was not a "man" since his wife would not bear a child with him. Jose took matters into his own hands. Jose could not take it anymore, so he killed his best friend. ...read more.

Knowing this is what allowed him to be successful and resolve his problems in the long run. At Macondo individuals did get involved in Jose's life. This brought much technology and forced him to continue experimenting. This was not good for Jose. He wanted to try and stay secluded in his basement with his scientific experiments. The endless research and the visions of Aguilar drove him insane. The only resolution for this was tying him to a tree. Macondo and Tres Marias are far from similar in physical appearance. But the similar things that each place accomplishes are very important and key to main characters and the development of the story. Esteban and Jose were able to leave their problems behind. For Esteban he was more successful than Jose but nevertheless both places served as a site of escape. At Tres Marias and Macondo technology and people invaded each civilization. With that it brought the sexual relations of local women with Esteban and Jose's son. These cause problems in both sets of lives. The reconstruction and construction of both places allowed for the development of Esteban, in which he prevailed and continued on to live a happy life. And for Jose it did allow him to escape him problems but now for long. He ended up tied to a tree for the rest of his life. 0530-019 1 ...read more.