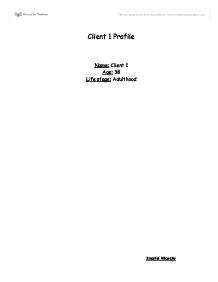 Unit 1, Basic Analyse of clients 1 and 2

Client 1 Profile Name: Client 1 Age: 38 Life stage: Adulthood ?Client 1 profile case study My first client is a female. She is 38. in her adulthood. She lives in a four bedroom house in Manchester. She actually really likes her neighbourhood, because for her it's perfect, really quite. She's been living there for five years. She lives with her husband and her two sons. Her husband is 53. He has been married before and had three children with his ex wife. She doesn't eat healthy. The only exercise that she takes is when her husband has to use her car once a week and then she has to take a five minute walk to work. When she was a teenager she used to be really thin, even that she's been always eaten junkie food. But then comes the adulthood, the marriage, the kids and the real weight as well. She smokes almost a pack per day, and drinks an amount of 5 can of beer in every week and in the weekend the amount really increases. The only operation that she had was the caesarean labour. She has got a degree in Business and she has her own Translations Company that she worked really hard to build it. She has got many people working for her. She started to work as an assistant in a big company of telesales, it was too stressing but she has always been really hard working. She was gaining experience, and she started to plain about her own company. she met her husband and he supported her about her idea, he gave her the money to start a successful partner ship with one of the girls that she met in the university. She didn't know how stressful it would be to be the chef. She used to like to swim when she was a teenager, she used to really enjoy it, but after marriage she doesn't have time for hobbies. ...read more.

- He goes to the dentist every year. Client 2's Health Needs Physical My client needs a healthy balanced diet, particularly because he is still in his adolescence. He is still in formation of his body, so he needs all the nutrients of all groups of foods, such as proteins, fats and carbohydrates. Don't forgetting about drinking lots of water. He needs to exercise regularly, but not a lot in a way that can affect his health. He needs to do regular check ups to make sure he goes to his adulthood totally health. Check ups like eye tests, developmental tests and dental tests. He needs to keep taking regular medicine when needed. Intellectual He goes to College, so he keeps his mind occupied with his work and homework. He is always taking extra courses involved with sports which are very good. However, he thinks that now how many sports as possible, better. He should talk to a professional about how important it is to keep the balance and do not exaggerate. He hasn't got a good knowledge about medication. He just takes his regular medication when needed. Emotional He has got a girlfriend. They have been in this relationship for five months. She gives him a lot of support and encouragement. He likes her a lot. He has a lot of support from his older brother as well. They are best friends and confide themselves. Thankfully his family has got a good money source. He feels safe by knowing that that he'll always have what he needs, as well as be able to do university without worrying about saving. He has got a high self esteem. He considers himself a good looking guy. He is good at most of the things that he does. Social He has got lots of friends. They are very important for him because they are always there for him when most needed. He is always going out with his friends, going on trips on holidays or throwing parties. ...read more.

Sterilizing is a process that eliminates transmissible agents from a surface, by usually heating it. When needed an injection, the dentist would open the new pack of disposable needles in front of my client, and after the using it, would put it in the special bin. While consulting a GP, he would wash his hands before starting the consult with my client. The GP would wear disposable gloves and a uniform showing cleanness and tidiness. Cheaper instruments would be disposable plastic ones, for example the stick that he uses to see through the throat, would only be pack opened in front of my clients. However, the expensive instruments, as could not be used as a disposable, would need to be sterilized after each patient, as a stethoscope used to hear my client's heat beat. On a visit to an optician's surgery, the optician also would be wearing a clean and tidy uniform. The cables and wires coming from the machines used to see through the eyes would be properly hidden, so that there is no risk of my client falling on them. The equipments would need to be health checked and approved. The equipped chair that is commonly used would need a disposable cover that would be changed in every interval between patients. Previously my client 2 could put on the braces, the orthodontist asked an X-ray of his teeth area. In the X-ray room, no on is allowed if not my client, because of how harmful the ray is. Even the assistant goes for a separate room. Before my client sits down on the special table, the machines above him are pulled to the side so that he can safely go up by the small steps ahead the table. Also the X-ray assistant that helps him uses a tidy uniform. When he goes to see a connexion adviser, in the room there should not be any trailing wires and the room should be in a suitable temperature, not too hot, not too cold. ?? ?? ?? ?? Ingrid Nicacio ...read more.