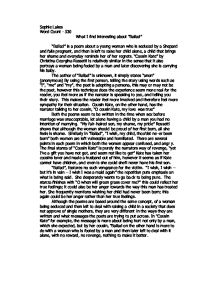 What I find interesting about &quot;Ballad&quot;

Sophie Lakes Word Count - 530 What I find interesting about "Ballad" "Ballad" is a poem about a young woman who is seduced by a Shepard and falls pregnant, and then is left to raise her child alone, a child that brings her shame and everyday reminds her of her regrets. "Cousin Kate" by Christina Georgina Rossetti is relatively similar in the sense that it also portrays a woman being fooled by a man and later discovering she is carrying his baby. The author of "Ballad" is unknown, it simply states "anon" (anonymous) By using the first person, telling the story using words such as "I", "me" and "my", the poet is adopting a persona, this may or may not be the poet, however this technique ...read more.

"My fair-haired son, my shame, my pride" Rossetti shows that although the woman should be proud of her first born, all she feels is shame. Similarly in "Ballad", "I wish, my child, thou'dst ne-er been born" both women are left vulnerable and humiliated. There are several points in each poem in which both the women appear confused, and angry. The final stanza of "Cousin Kate" is purely the narrators way of revenge, "yet I've a gift you have not got, and seem not like to get" Kate has taken her cousins lover and made a husband out of him, however it seems as if Kate cannot have children, and even is she could she'll never have his first son. "Ballad", features no such vengeance for the victim. ...read more.

She frequently mentions wishing her child had never been born; this again could be her anger rather than her true feelings. Although the poems are based around the same concept, of a woman being seduced and then left to deal with raising a child in a society that does not approve of single mothers, they are very different in the ways they are written and what messages the poets are trying to put across. In "Cousin Kate" for example, the message is more about being hurt not only by a man, which she expected, but by her cousin, "Ballad on the other hand is more to do with a woman who is fooled by a man and then later left to deal with it alone, with no reward, no revenge, nothing to make it better. ...read more.