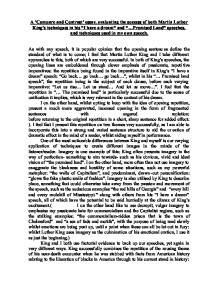 A 'Compare and Contrast' essay, evaluating the success of both Martin Luther King's techniques in his

A 'Compare and Contrast' essay, evaluating the success of both Martin Luther King's techniques in his "I have a dream" and "...Promised Land" speeches, and techniques used in my own speech. As with any speech, it is popular opinion that the opening sentences define the standard of what is to come; I feel that Martin Luther King and I take different approaches to this, both of which are very successful. In both of King's speeches, the opening lines are emboldened through clever emphasis of passionate, repetitive imperatives: the repetition being found in the imperative itself in King's "I have a dream" speech: "Go back... go back... go back...", whilst in his "... Promised land speech", the repetition being in the subject of each clause, before each varying imperative: "Let us rise... Let us stand... And let us move...". I feel that the repetition in "... The promised land" is particularly successful due to the sense of unification it implies, which is very relevant in the context of his dream. I on the other hand, whilst opting to keep with the idea of opening repetition, present a much more aggravated, incensed opening in the form of fragmented sentences with angered repletion: before returning to the original repetition in a short, sharp sentence for added effect: ). ...read more.

King and I both use factorial evidence to back up our speeches, yet again in very different ways. King successfully combines the repetition of the rousing theme of his near-death encounter when he was stabbed with facts from American history relating to the liberation of blacks in America through to his current stand in history: "If I had sneezed, I wouldn't have been here in 1963...". Thus whilst King uses historical and factual evidence as his stepping-stone and justification of his actions, I use it in an altogether different manner. Within the answer, there is clever repetition of the question "in 1990 which health service was regarded as the world's best?", as I give factorial evidence that links to America and commercialism are not the only way to live, thus I in a way use evidence as my weapon, proving that my dreams are accomplishable. Somewhere where I believe I have been more successful than King is in my application of questions. Arguably, King knows that he has support from his listeners; they are his fans and so he does not need to question and argue with them. ...read more.

slogan "All power to the Soviets [the collective group of people supporting him]"; )I however feel this is very striking, especially when most of the other sentences are very log, thus creating varied syntax. There are many bold images used by both of us: King keeps to his usual system of using vivid imagery to emphasise his goals ("let freedom ring", "all of God's children...join hands"). In addition to this, our paragraphs vary in that whilst my speech really ends on the penultimate sentence- the following sentence merely supporting this- "The power is in the people.", King's speech climaxes again in his final words: " 'Thank God Almighty, we are free at last!' ", leaving I feel a greater lasting impression on his audience. In conclusion, I feel there is no way of telling who is the better speech maker, myself or King, due to the diversity of our topics. However, I feel that King has the obvious advantage over myself, as whilst I am merely using techniques in creative writing in a classroom or at home, Martin Luther King actually addressed the masses with his controversial views; something which inevitably led to his assassination, on April 4th 1968. ...read more.