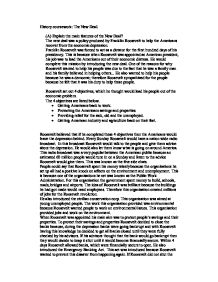 (A) Explain the main features of the New Deal?

History coursework: The New Deal. (A) Explain the main features of the New Deal? The new deal was a policy produced by Franklin Roosevelt to help the Americans recover from the economic depression. Franklin Roosevelt was forced to act as a dictator for the first hundred days of his presidency. This is because when Roosevelt was appointed as American president, his job was to lead the Americans out of their economic distress. He would complete this mission by introducing the new deal. One of the reasons for why Roosevelt wanted to help his people was due to the fact that he was a family man and his family believed in helping others... He also wanted to help his people because he was a democrat; therefore Roosevelt sympathized for the people because he felt that it was his duty to help these people. Roosevelt set out 4 objectives, which he thought would lead his people out of the economic problem. The 4 objectives are listed below. * Getting Americans back to work. * Protecting the Americans savings and properties. * Providing relief for the sick, old and the unemployed. ...read more.

Within 4 days Roosevelt allowed banks, which were financially secure to open. He also introduced the Emergency Banking Act. This act was introduced because Roosevelt wanted to prevent this disaster from happening again. If Roosevelt did not shut the banks then more banks would have gone bankrupt, this would then have lead to an increase in unemployment. Therefore this was a clever idea from Roosevelt. He also set the Agricultural Adjustment Administration. This organisation was aimed to improve the long term faced by the farmers. This organisation set quotas to reduce production, so therefore in the near future this would enable the prices of food to go up using the supply and demand theory. This would also cause profits to hit a record a high because, the farmers would now be getting double amount of money that they used to. This organisation was introduced to get the American agriculture industry back on its feet. This is because this organisation aim was to increase farmer's income which would gradually improved farmer's profits and therefore this enabled farmers to modernise their technology used in their farming. I.e. (using all resources efficiently to increase optimum output.) ...read more.

This organisation was set up to help the poor the sick and unemployed, by providing them with soup, blankets and employment schemes. Roosevelt tried to accomplish his fourth objective of getting American industry and agriculture back on their feet. He completed this aim by introducing the Agricultural Adjustment Administration. This organisation helped get American Agricultural industry back on its feet by setting quotas, which enabled farmers to charge more money for their products. This therefore enabled farmers to improve their facilities, which would then enable the farmers to use their resources more efficiently. He also set up the Tennessee Valley Authority, which helped American industry to get back on its feet. This is because this valley was made on wasteland and it created electricity for the underdeveloped areas the valley also created millions of Jobs. This is why I think that this valley helped American industry because it supplied electricity to the underdeveloped areas and also this valley disposed the wasteland. I think that Roosevelt accomplished all of his aims, but I believe he accomplished the first aim the most successfully. This is because all the organisations he set up had a knock on affect on employment. This is why I think Roosevelt completed this aim the most successfully. ...read more.