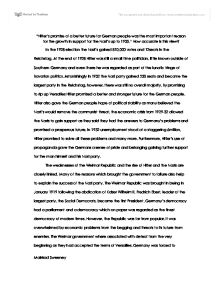 Hitlers promise of a better future for German people was the most important reason for the growth in support for the Nazis up to 1933. How accurate is this view?

"Hitler's promise of a better future for German people was the most important reason for the growth in support for the n**i's up to 1933." How accurate is this view? In the 1928 election the n**i's gained 810,000 votes and 12seats in the Reichstag. At the end of 1928 Hitler was still a small time politician, little known outside of Southern Germany and even there he was regarded as part of the lunatic fringe of Bavarian politics. Astonishingly in 1932 the n**i party gained 230 seats and became the largest party in the Reichstag, however, there was still no overall majority. By promising to rip up Versailles Hitler promised a better and stronger future for the German people. Hitler also gave the German people hope of political stability as many believed the n**i's would remove the communist threat, the economic crisis from 1929-32 allowed the Nazis to gain support as they said they had the answers to Germany's problems and promised a prosperous future. In 1932 unemployment stood at a staggering 6million, Hitler promised to solve all these problems and many more. Furthermore, Hitler's use of propaganda gave the Germans a sense of pride and belonging gaining further support for the man himself and his n**i party. The weaknesses of the Weimar Republic and the rise of Hitler and the Nazis are closely linked. Many of the reasons which brought the government to failure also help to explain the success of the n**i party. ...read more.

The invasion produced a widespread sense of unity and hatred of the French but the policy of "passive resistance" sounded the deathknell for the German market. From 1922-1923 Hyperinflation took over Germany because the cost of things was rising so fast money became worthless. The government in turn had no answer to these problems and Germany was faced with serious financial difficulties. This Hyperinflation badly hit the working and middle classes and many ending up swapping goods instead of being paid in money. In 1924 the Nazis gained 32 seats in the Reichstag and the communists gained 64seats. The economic situation improved in 1924 when, as a result of the Dawes plan, Germany received a loan of 40million and the repayment schedule for reparation was relaxed to allow Germany to pay what she could afford. From 1924-1929 seemed to be the years of recovery for Germany. As a result of the Dawes Plan, a sliding scale of repayment would allow for a gradual increase in payments as the German economy revived. French troops were withdrawn from the Ruhr and a new currency was brought out. In 1925, trade restrictions imposed on Germany were lifted and trade revived. In 1929 the Young Plan was introduced which reduced the reparations debt to 2000 million to be paid in annual installment over 59years. Much of the recovery was due to the work of Gustav Stresemann, Foreign Minister 1923-1929, as it was he who persuaded the French to leave the Ruhr by agreeing to pay reparations, he ...read more.

Hitler also knew that the attraction of physical violence brought him support from many i\of the frustrated elements of German society. He was quite prepared to take full advantage of this. The elections of 1932 in particular were very violent affairs, with the death role running into hundreds. Hitler's SA where the outright winners in the competition to disrupt the meetings of rivals and intimidate, maim or kill their supporters. In many of Hitler's propaganda posters he used scapegoats such as the Jews and blamed them for the weakness of Germany. Also Hitler's use of uniforms and flags for Nazism gained the support of many young people as they want to belong to something. In conclusion, the view that "Hitler's promise of a better future for German people was the most important reason for the growth in support for the n**i's up to 1933", is quite accurate as many German people looked towards Hitler to abolish the treaty of Versailles, create jobs and to make Germany strong again. However there are other factors which led to Hitler coming into power such as his charismatic personality, the propaganda he used and the weakness of the Weimar Republic. Although all this would not of been plausible if it had not been for Fritz von Papen's plan to make Hitler Chancellor. Von Papen's ludicrous idea that Hitler would of acted as his "drummer boy" gained Hitler and the Nazis more power than they could of accomplished on their own. Von Papen also gave Hitler and the Nazis a rise to power in a completely constitutional manner. ?? ?? ?? ?? Mair�ad Sweeney ...read more.