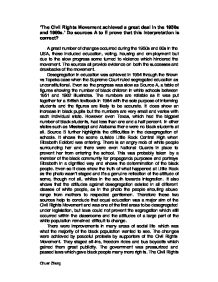 The Civil Rights Movement achieved a great deal in the 1950s and 1960s. Do sources A to E prove that this interpretation is correct?

'The Civil Rights Movement achieved a great deal in the 1950s and 1960s.' Do sources A to E prove that this interpretation is correct? A great number of changes occurred during the 1950s and 60s in the USA, these included education, voting, housing and employment but due to the slow progress some turned to violence which hindered the movement. The sources all provide evidence on both the successes and drawbacks of the movement. Desegregation in education was achieved in 1954 through the Brown vs Topeka case when the Supreme Court ruled segregated education as unconstitutional. Even so the progress was slow as Source A, a table of figures showing the number of black children in white schools between 1951 and 1962 illustrates. The numbers are reliable as it was put together for a British textbook in 1984 with the sole purpose of informing students and the figures are likely to be accurate. It does show an increase in black pupils but the numbers are very small and varies with each individual state. However even Texas, which had the biggest number of black students, had less than one and a half percent. In other states such as Mississippi and Alabama there were no black students at all. ...read more.

Even in the north where integration was much more successful 50% of blacks still lived in ghettos and were discriminated against. The government could only legislate but not enforce these laws and some blacks believed much more still needed to be done. Source C is a great example of how change has occurred but was not complete. In this source Martin Luther King lists the many achievements in order to highlight the improvements such as the desegregation of lunch counters and inter-state travel. However the fact that he had to make this statement in 1967 to justify his non-violent methods show that the Civil Rights Movement was far from over and there was now a split within the Civil Rights Movement with a number of his followers beginning to seek new, more extreme methods of Malcom X and the Black Panthers as they grew tired of the slow progress. It's a lot more useful in exposing the divisions within the movement as the tone is very positive and biased to the successes of the non-violent campaign. Voting was granted to all adult blacks by the Voting Rights Act 1965 which also abolished the poll tax. In some areas black politicians were even elected into government, such as Carl Stokes who became the first black mayor of a major city in America when he won the election in Cleveland in 1967. ...read more.

It's an article from a US magazine aimed mainly at a white audience which was likely to have been used as propaganda to discredit black people. It's a conversation between three young blacks on a race riot and they are talking about the damage and destruction they'd caused with pride and satisfaction. This was mainly due the to fact that some of the newly educated young generation of blacks were disillusioned and wanted immediate change as they hadn't experienced the same hardships as their ancestors who were content with steady progress and knew how much had already improved. The actions of these young people generalised the whole black population as violent and made obsolete the much of the good work of the peaceful protesters. Along with Source C it highlights why the Civil Rights Movement slowed down with many people turning to view the blacks as uncivilised and therefore undeserving of any more civil rights. Ultimately the sources together prove that the Civil Rights Movement achieved a great deal during the 1950s and 60s, most notably the desegregation of schools, the Civil Rights Acts and Voting Rights Act. However these were mostly through legislation and it was a long time before they actually occurred in reality. It was this slow progress that frustrated many and led to the split in movement which consequently prevented it from achieving much more than it should have. ?? ?? ?? ?? Chuer Zhang ...read more.