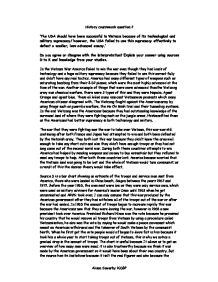 The USA should have been successful in Vietnam because of its technological and military supremacy/ however, the USA failed to use this supremacy effectively to defeat a smaller, less advanced enemy. Do you agree or disagree with the interpretat

History coursework question 2 'The USA should have been successful in Vietnam because of its technological and military supremacy/ however, the USA failed to use this supremacy effectively to defeat a smaller, less advanced enemy.' Do you agree or disagree with the interpretation? Explain your answer using sources D to K and knowledge from your studies. In the Vietnam War America failed to win the war even though they had loads of technology and a huge military supremacy because they failed to use this correct fully and didn't have any real tactics. America had many different types of weapons such as saturating bombing from their B-52 planes, which were the most highly advanced at the time of the war. Another example of things that were more advanced than the Vietcong army was chemical warfare, there were 3 types of this and they were Napalm, Agent Orange and agent blue. These all killed many innocent Vietnamese peasants which many American citizens disagreed with. The Vietcong fought against the American army by using things such as guerrilla warfare, the Ho Chi Minh trail and their tunnelling systems. In the end Vietcong won the Americans because they had outstanding knowledge of the surround land of where they were fighting such as the jungle areas, this benefited them as the Americans had better supremacy in both technology and military. The war that they were fighting was the war to take over Vietnam, this war was still continuing after both France and Japan had attempted to win and both been defeated by the Vietminh army. They both lost this war because they didn't know the area well enough to take any short cuts and also they didn't have enough troops as they had not long came out of the second world war. ...read more.

They thought that this would have made it easier for them to fight the Vietcong because they would be able to see their enemy, they also thought it would help to win the war. However the Vietcong had an underground tunnel that had been there for 20 years so it didn't make it any harder for them to hide from the Americans. You couldn't totally rely on this source because it had was designed to be sold in a newspaper; even though the source is fact based it would still not be completely truthful because it was only aimed at those who could read and were educated at the time. Also if it were totally truthful people would probably not buy it because it would be boring and not very interesting. This source also shows that the statement in the question was true because they had invented chemical warfare and the Vietcong only had basic weapons. Source H is a diagram of the tunnel system that had been there for at least 20 years before America started to fight the Vietcong, this was because they had used them to fight against both France and Japan; the Vietcong could live in these tunnels for around 3 months at a time; the source is from a text book which would be reliable and useful as it would have been researched. The source only gives a basic outline of the tunnels with a little bit of detail; the tunnels would have been miles longer. This makes it have limits because you cannot tell what they were totally like or the reality of them. The source was produced after the war so that you could get an insight of what they were like; if the Americans found the entrances to the tunnels ...read more.

The American army were very different to the Vietcong because they were very technologically superior and also Hi-tech; not only did they have the basic artillery but they had the latest planes which where the B-52 bombers and they had helicopters. Onto of this they had chemical warfare that they made called Napalm; Defoliants named Agent Orange and agent blue, these killed innocent peasants and failed to stop the Vietcong guerrillas. The Vietnamese peasants they captured they made them leave Vietcong controlled areas and live in defended strategic hamlets in loyal areas. ARVN sent American troops out on patrol, which were then supported by air and artillery when they got attacked. The Americans called the Vietcong 'Charlie' and ARVN sent out search and destroy patrols for them; however these patrols were clearly visible and the Vietcong found it easy to ambush them, this then led to the Americans burning whole villages known as 'Zippo raids' and they then carried out the unprovoked My Lai massacre in 1968. Overall I agree with the statement because America were more advanced on the ground and in the air with technology than the Vietcong because the Vietcong never had any major bombs, planes, helicopters or chemical warfare; they only really had basic weapons, tunnels and trails to supply weapons. The Vietcong where also more military superior than America because they had both men and woman fighting in the war; they also had started to train children to plant bombs and mines; demine the American bombs and mines, then reuse them to make new weapons for the Vietcong to use. Even though the Americans were more technologic than the Vietcong they failed to win the Vietcong army because the American soldiers had no knowledge of the area that they where fighting in and they also failed to use their weapons effectively. Alison Sowerby 10DBP ...read more.