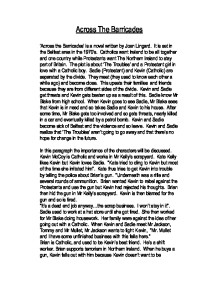 'Across the Barricades' is a novel written by Joan Lingard.

Across The Barricades 'Across the Barricades' is a novel written by Joan Lingard. It is set in the Belfast area in the 1970's. Catholics want Ireland to be all together and one country while Protestants want The Northern Ireland to stay part of Britain. The plot is about 'The Troubles' and a Protestant girl in love with a Catholic boy. Sadie (Protestant) and Kevin (Catholic) are separated by the divide. They meet (they used to know each other a while ago) and become close. This upsets their families and friends because they are from different sides of the divide. Kevin and Sadie get threats and Kevin gets beaten up as a result of this. Sadie know Mr Blake from high school. When Kevin goes to see Sadie, Mr Blake sees that Kevin is in need and so takes Sadie and Kevin to his house. After some time, Mr Blake gets too involved and so gets threats, nearly killed in a car and eventually killed by a petrol bomb. ...read more.

When Kevin and Sadie meet Mr Jackson, Tommy and Mr Mullet, Mr Jackson wants to fight Kevin, "Mr. Mullet and I have some unfinished business with this fella here." Brian is Catholic, and used to be Kevin's best friend. He's a shift worker. Brian supports terrorism in Northern Ireland. When he buys a gun, Kevin falls out with him because Kevin doesn't want to be anything to do with 'The Troubles'. Brian and two of his friends then beat Kevin up. Mrs. Mullet is the local Protestant gossip. Linda (her daughter) is like her aswell. Mrs. Mullet is really nosy and tries to make trouble for people. Linda tells Mr Jackson. "She was with that Catholic boy Kevin McCoy." Brede McCoy is Kevin's sister. She was shot when she was young. "Brede almost died. Remember?" She tries to protect Kevin by telling Sadie to stay away. "But I've come to ask you not to meet him...Then don't see him again. Please don't see him again, Brede pleaded." ...read more.

Brian then says "We have to be prepared to fight for what we believe in" trying to get Kevin to join him. "I hate the idea of Brian Rafferty telling me what to do" Kevin tells Sadie when he gets fed up with Brian. It is very detailed how Joan Lingard describes the violence. "There were disturbances in the night. Sound of gunfire, rumble of cars, shouting in the distance, flicker of flames against the night sky". This is a good example of imagery. I think the author is trying to imply that 'The Troubles' are not going to go away but will get worse by the language she uses to describe the areas and the activities. There are constant bombings and Mr Blake dies. Catholics and Protestants just send a bomb back every time something happens. Just now the violence has got worse, Joan Lingard was right! I don't think that the violence is going to get better because the deaths are constant as well as the trouble, people are trying to follow their beliefs by killing other people. There is always going to be the divide. Kevin and Sadie were right to leave, they realized that 'The Troubles' were getting worse. ...read more.