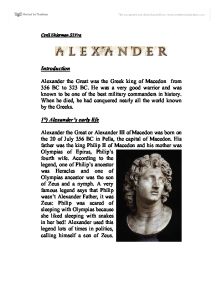 Cyril Ekierman S3Fra Introduction Alexander the Great was the Greek king of Macedon from 356 BC to 323 BC. He was a very good warrior and was known to be one of the best military commanders in history. When he died, he had conquered nearly all the world known by the Greeks. 1�) Alexander's early life Alexander the Great or Alexander III of Macedon was born on the 20 of July 356 BC in Pella, the capital of Macedon. His father was the king Philip II of Macedon and his mother was Olympias of Epirus, Philip's fourth wife. According to the legend, one of Philip's ancestor was Heracles and one of Olympias ancestor was the son of Zeus and a nymph. A very famous legend says that Philip wasn't Alexander Father, it was Zeus: Philip was scared of sleeping with Olympias because she liked sleeping with snakes in her bed! Alexander used this legend lots of times in politics, calling himself a son of Zeus. ...read more.

against the city of Thebes and the city of Athens (35 000 men). Alexander was the commander of the left part of the army and was attacking the Thebans while Philip had the other part of the army and was attacking the Athenians. Macedon won and Athens and Thebes were colonized. When Alexander was 20, Philip was assassinated. A guard plunged a spear into his chest. Some say it was a conspiracy orchestrated by Olympias. And this way, Alexander inherited a kingdom. 3�) Alexander conquers the world Inheriting a kingdom from his father didn't really please Alexander. He wanted to be a hero, and a hero doesn't get every thing given to him. Alexander wanted to get started conquering Middle-East and Asia. He got his first opportunity almost immediately. Some of the Greek city-states saw the ascension of the 20 year old Alexander as a chance to regain their independence from the Macedonians. Alexander took care of the little rebellion, to set an example, he completely razed the city of Thebes in 335 B.C., killing most of the population, including women and children, and making slaves of those few left alive. ...read more.

In 11 years, from 335 B.C. to 324 B.C., Alexander and his army battled their way across 22,000 miles. 4�)The beginning of the end The beginning of the end started for Alexander when his best friend Hephaestion died of a fever. Hephaestion had been his close companion since they were teenagers. Hephaestion's death demoralized Alexander. In the same year as Hephaestion's death, 324 B.C., Alexander's generals convinced him to leave from the action at the eastern frontier to secure his power back in Babylon, the capital of the empire. This is not what Alexander wanted. He wanted to be a hero. He didn't want to sit on a throne, administering the business of an empire. He wanted to be on his horse, sword in hand, conquering new lands. Alexander spent the next year in Babylon, without his favourite horse, without his best friend, and without the action and glory of battle. Alexander would drink a lot. One night he was drunk and caught a fever. After twelve painful days he died in Babylon at the age of 33. ...read more.