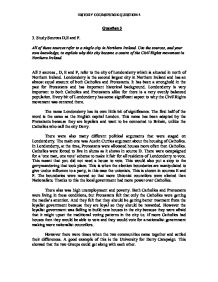 The boundaries were moved so that more Unionist councilors were elected then Nationalists. Thanks to this the local government had more power over Catholics. There also was high unemployment and poverty. Both Catholics and Protestants were living in these conditions, but Protestants felt that only the Catholics were getting the media's attention. And they felt that they should be getting better treatment from the loyalist government because they are loyal so they should be rewarded. However the loyalist government was failing to build new houses in the city because they were afraid that it might upset the traditional voting patterns in the city i.e. if more Catholics had houses then they would be able to vote and they would vote for a nationalist government making more nationalist councilors. However there were times when the two communities came together and settled their differences. A good example of this is the University for Derry Campaign. ...read more.

Both Catholics and Protestants started to street fight. Another major riot was the Burntollet Bridge riot. It was sparked of when a group of peaceful civil rights campaigners were ambushed by a mob of Loyalist Protestant thugs just a few miles from Londonderry. This riot should have been controlled by the RUC that was to protect the nationalist marchers, but they did nothing. They RUC were actually seen siding with the ambushers. After these marches the Catholics were starting to believe that the police couldn't and wouldn't protect them. They were completely vulnerable. So when the British army came they were very pleased. So Londonderry became the centre of the Civil Right Movement because the Catholics there were very unimpressed with the treatment that they received, Londonderry was famous for its historical background and the two communities had shown that they could get along together as shown in the University for Derry campaign. ?? ?? ?? ?? HISTORY COURSEWROK QUESTION 3 ...read more.