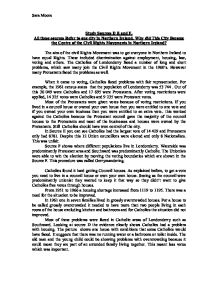 Study Sources D E and F. All these sources Refer to one city in Northern Ireland. Why did This City Become the Centre of the Civil Rights Movements in Northern Ireland? The aim of the civil Rights Movement was to get everyone in Northern Ireland to have equal Rights. These included discrimination against employment, housing, law, voting and others. The Catholics of Londonderry faced a number of long and short problems, which saw many join the Civil Rights Movement in the 1960's. However many Protestants faced the problems as well. When it came to voting, Catholics faced problems with fair representation. For example, the 1961 census states that the population of Londonderry was 53 744 . Out of this 36 049 were Catholics and 17 695 were Protestants. After voting restrictions were applied, 14 325 votes were Catholics and 9 235 were Protestant votes. Most of the Protestants were given votes because of voting restrictions. If you lived in a council house or owned your own house then you were entitled to one vote and if you owned your own business then you were entitled to an extra vote.. ...read more.

Looking at source D the evidence clearly shows Catholics had a problem with housing. The picture shows one house with conditions that some Catholics would have faced. It suggests that there was no running water or a bathroom or toilet inside. The old man and the young child could be showing problems with overcrowding because it could mean they are part of an extended family living together. This meant less votes which was important. Poor housing saw many Catholics join the Civil Rights Movement. The Catholics of Londonderry faced difficulties in gaining work. From 1966 to 1967 (one year) unemployment went up by 10%. The Government did little to bring employment to Londonderry. New factories were put up in the east, where unemployment and population was law. Londonderry was west where unemployment and population was high. Londonderry had a population of 53 762 in 1961 compared to Larne's 16 350. Larne had 40square feet of factory space. This stopped the Catholics from potential work they would get if more factory space was made available. ...read more.

On January 30th 192 was the date of some very famous fighting's. The fighting in Northern Ireland had reached a new level. Although marches had been banned by the Government after internment the Civil Rights Association planned a march to protest against the internment. As the unarmed marchers approached the barriers which the army had put across the road to stop them leaving the Bogside, stones and insults were thrown at the military and s****h squads of paratroopers went into the crowd to make arrests. In doing so the violence increased and the soldiers s fired their weapons. Thirteen unarmed civilians died and many more were injured. This event again drove a deeper wedge between the catholic community and the ruling authorities. Northern Ireland was then put under the direct rule of Westminster and the Catholics were not impressed. They decided to work harder for their rights. Many factors helped to make Londonderry a centre for the civil rights movement. Both long term and short term help attract attention to the area. gh ?? ?? ?? ?? Sara Moore ...read more.