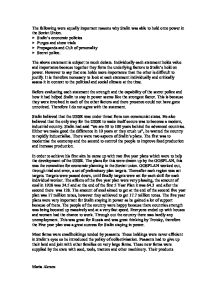 The following were equally important reasons why Stalin was able to hold onto power in the Soviet Union. ? Stalin's economic policies ? Purges and show trials ? Propaganda and Cult of personality ? Secret police. The above statement is subject to much debate. Individually each statement holds value and importance because together they form the underlying factors to Stalin's hold on power. However to say that one holds more importance than the other is difficult to justify. It is therefore necessary to look at each statement individually and critically assess it in context to the political and social climate at the time. Before evaluating each statement the strength and the capability of the secret police and how it had helped Stalin to stay in power seems like the strongest factor. This is because they were involved in each of the other factors and there presence could not have gone unnoticed. Therefore I do not agree with the statement. Stalin believed that the USSR was under threat from non-communist states. He also believed that the only way for the USSR to make itself secure was to become a modern, industrial country. Stalin had said "we are 50 to 100 years behind the advanced countries. ...read more.

Stalin aim was to remove all potential opposition. This was when the purges started. Stalin arrested, imprisoned, murdered thousands of people throughout the USSR. The purges began in 1934 when Kirov, the leader of Leningrad Communist party was murdered. Stalin used this murder as an excuse to 'purge' or clear out his opponents in the party. Historians strongly suspect that Stalin arranged for Kirov's murder to give him that excuse. In show trials loyal Bolshevik's such as Kamenev, Bukharin and Zinoviev confessed to being traitors to the State. It was not only leading figures who were purged. Around 500,000 Party members were arrested on charge of anti-Soviet activities and either executed or sent to labor camps. Many were tortured and were threatened. If one did not admit to the accusation they were being punished for, it would be the end of their family. Stalin held show trials; this would prove to others that Stalin was right to punish them. This gave Stalin opportunities to hold thousands of show trials and get away with each and every one of them. This created disappearance of people within and outside of the party. The purges created fear throughout the country. People were afraid of even thinking of something that was against the rules. ...read more.

Stalin appeared to be trying to make the country the best it has ever been and nothing else. Everyone thought due to the propaganda that Stalin was great and was the reason why Russia was going to be great in the future. The propaganda that Stalin enforced included schools to teach the children about Stalin being a hero. Images of Stalin were in lots of places, books and songs all praised Stalin. More importantly it motivated workers to work faster, and better. The most important of all, was the fact that it made it seem as if Stalin had nothing to do with the purges. The people of the country were entirely certain that he had nothing to do with them. In my opinion the Secret Police most certainly is the most important reason why Stalin was able to stay in power. This is because this allowed him to take complete control over the country by fear. Also this allowed him to carry out his policies without many difficulties. The next important reason why he was able to stay in power is the purges, because this took away all his opposition and allowed him to make use of his economic policies. The propaganda was important for Stalin however it was the least important for Stalin to stay in power. The Secret police contributed in almost everything for Stalin therefore in the most important. ?? ?? ?? ?? Maria Akram ...read more.