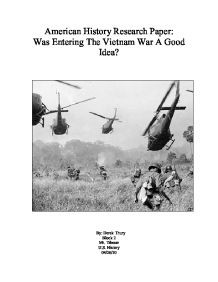 American History Research Paper: Was Entering The Vietnam War A Good Idea? By: Derek Thury Block 2 Mr. Tibesar U.S. History 04/26/10 I. Intro Going to Vietnam was a good thing for the U.S. It is, however, the most hated and protested war in all of U.S. history. However, it was a needed war. We went to Vietnam to stop the spread of communism, and for the most part succeeded. Even thought it was the most military drafts ever given out, and it caused massive inflation in the U.S. The Vietnam War was an effect of the Cold War, which was an arms build up between Russia and the U.S. Then Russia tried to turn Vietnam into a communist country, so the U.S. intervened. In the following you will see that entering the Vietnam War was a good thing and that otherwise communism would still be very popular today, even though it was the only war the U.S. ...read more.

In doing this we gained a little help from them in future wars (O'Brien 3). We also gained some financial gain from the war. With people buying war bonds and the draft, we didn't need to worry too much about money (Welch 12). Plus, with the withdraw of our soldiers we had an excess amount of money (Welch 13). So we gained the support of the French and got some money, but unfortunately it was at the cost of 58,168 U.S. troops (Maraniss 307). A huge reason that entering The Vietnam War was that it really helped boost our economy as a country. When we entered we had a mad rush of people buying war bonds to help support our troops and the war cause (Maraniss 256). Then when we pulled out of the war, we actually didn't spend all our money on the war. So we gained some money. Unfortunately a lot of the money went missing with President Nixon resigning (Brownell 56). ...read more.

It was so protested that many of the people who were drafted left the country and fled to Canada. The people who didn't go after the war were pardoned (O'Brien 5). The last reason that it was a bad idea entering The Vietnam was that it was the only war we ever lost. However, many people believe it was a good thing because it showed the world that America could infact lose a war, that we weren't all powerful (Welch 10). IV. Conclusion With the facts given, it is obvious that going to Vietnam was a good thing for the U.S. Even it was the most protested and hated war in all of U.S. history; we still accomplished the main goal of what we went there for. This was to stop the spread of communism. We also got, sort of, a head start in The Cold War. Even though the Vietnam War was technically caused by the beginning of The Cold War. Not to mention that it was the most military drafts ever give. However, you can't really deny the fact that it was a necessary war, that without it, communism would be still popular today. ...read more.