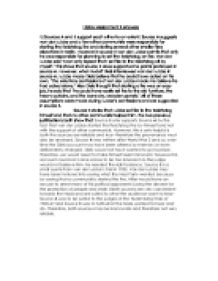 Analsysis of two sources on the Reichstag Fire.

History Assignment B Answers 1) Sources A and B support each other to an extent. Source A suggests van der Lubbe and a few other communists were responsible for starting the Reichstag fire and starting several other smaller fires elsewhere in Berlin. However in source B van der Lubbe admits that only he was responsible for planning to set the Reichstag on fire; Van der Lubbe said 'I can only repeat that I set fire to the Reichstag all by myself.' This shows that source B does support some points portrayed in source A. However, when Rudolf Diels interviewed van der Lubbe in source A, Lubbe made Diels believe that he could have acted on his own, 'The voluntary confessions of van der Lubbe made me believe he had acted alone.' Also Diels thought that starting a fire was an easy job, he said that 'he could have easily set fire to the old furniture, the heavy curtains, and the bone dry, wooden panels.' ...read more.

Van der Lubbe may have been tortured into saying what the Nazi Party wanted because by saying that a communist/s started the fire, Hitler would have an excuse to arrest many of his political opponents (using the decree for the protection of people and state.) Both sources are very convenient towards the Nazis and are suited to what the audience want to hear- Source A was to be suited to the judges at the Nuremberg Trials of 1945-47 and Source B was to fulfil what the Nazis wanted to hear and do. Therefore, both sources may be inaccurate and therefore not very reliable. 2. When Diels wrote his account, it was well after World War II- This may mean that the source is inaccurate. Straight after the war had ended another one started; this one was called the Cold War or 'the War of Words'. USA, Britain and France were fighting against the communist (USSR). ...read more.

In addition, there are some major concerns when using this account as a primary source. These concerns are due to the content and motive for writing the account. One of the major problems with the account is when it was written- a full 12 years after the events occurred. Although the burning of the Reichstag may be hard to forget, there is no way that Diels could remember everything that happened in the source, especially in such detail. Diels gives hugely complicated quotations, such as G�ring shouting; 'There will be no mercy now. Anyone who stands in our way will be cut down. Every communist will be shot or hanged. Everybody supporting the communists must be arrested.' This quote could not have so accurately remembered from such a long time ago, it is probably made up, making the account even more unreliable and inaccurate. As a result, the point of view of the account Diels put himself into may not represent of what he truly believes. Clearly, Source A is not a very reliable source due to the circumstances Rudolf Diels was in. ...read more.