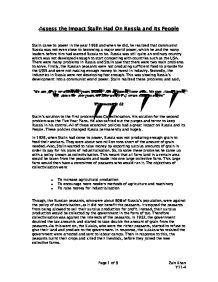 Assess the Impact Stalin Had On Russia and Its People Stalin came to power in the year 1938 and when he did, he realized that communist Russia

Assess the Impact Stalin Had On Russia and Its People Stalin came to power in the year 1938 and when he did, he realized that communist Russia was not even close to becoming a major world power, which he and the many leaders before him had wanted Russia to be. Russia was still quite an ordinary country which was not developed enough to start competing with countries such as the USA. There were many problems in Russia and Stalin saw that there were two main problems to solve. Firstly, the Russian peasants were not producing sufficient food to provide for the USSR and were not making enough money to invest in industry. Secondly, the industries in Russia were not developing fast enough. This was slowing Russia's development into a communist world power. Stalin realized these problems and said, "We are fifty or a hundred years behind the advanced countries. We must make good distance in ten years. Either we do it, or we shall go under." Longman, Pg. 68 Stalin's solution to the first problem was Collectivisation. His solution for the second problem was the Five Year Plans. He also carried out the purges and terror to keep Russia in his control. All of these economic policies had a great impact on Russia and its People. These policies changed Russia permanently and hugely. In 1928, when Stalin had come to power, Russia was not producing enough grain to feed their workers. They were about two million tons short of the amount of grain needed. Also, Stalin wanted to raise money by exporting surplus amounts of grain in order to pay for his plans of industrialisation. So, to solve these problems he came up with a policy known as collectivisation. This meant that all farm land in a certain area would be taken from the peasants and made into one large collective farm. This large farm would then have a committee of peasants who would run it. ...read more.

Though, the government's only concern was to meet the targets of the five year plans, even if it meant that poor quality products would be made. This is how the government met the targets and this is why the central planning of the government was not very effective. Another problem in the factories was that the worker's now had to use new machinery and usually mistakes were made and machines were mistakenly broken by the unskilled workers. The workers were unskilled because most of them used to be peasants that knew nothing about modern technology. The workers who broke machinery were punished very badly. They were accused of purposely sabotaging the machinery and they were put on trial. These trials created fear in the workers minds and this possibly had worse effects in the factories. If mistakes were made then the workers started to cover them up and hide them. Then when it came time to produce output figures, most factory managers would produce incorrect figures as they were not able to meet the required targets. By 1928, Stalin had his friends in the Politburo and so he was effectively the leader of the USSR, which was a one party state. Stalin was a dictator. Along with his economic policies of Collectivisation and the Five Year Plans, he was personally responsible for the murder of about 12 million Soviet citizens. The mass murder caused by Stalin is known as the 'Stalinist Purges'. The meaning of 'purge' is to get rid of hostile elements from a system. The purges can be broken down into three main periods: The first period was between 1928 and 1934. During to this period up to 6 million kulaks were purged or eliminated. This is because they opposed Stalin's economic policies of collectivisation and industrialization. Stalin wanted the whole class labeled kulaks to be eliminated. Also, some industrial workers who were accused of sabotaging machinery were put on trial. ...read more.

Stalin's aim for education can be summed up in rule one of education: It is the duty of each school child to acquire knowledge persistently so as to become an educated and cultured citizen and to be one of the greatest possible services to his country. Stalin and the Soviet Union - Brooman - Pg.19 As a result of this new education scheme introduced by Stalin, illiteracy nearly disappeared: "By 1939, pf people aged 9 to 49, 94% in towns and 86% in the countryside could read and write." Stalin and the Soviet Union - Brooman - Pg.18 In conclusion, Stalin's impact on Russia was huge and extremely important. He may have continued what Lenin had started, yet it was Stalin who changed Russia forever. He turned Russia into a world super power and a modern industrial nation. Also, he did this effectively and very rapidly and in only thirty years. When Stalin took over after Lenin's death, Russia was about to crumble. Stalin rebuilt it using his very harsh yet effective policies of collectivisation and industrialisation. Unlike Lenin, Stalin's reign over Russia showed more development and this was essential for Russia to become what it is today. Though, it is true that Stalin did follow the foundations that Lenin built. Under his rule, there were great advances in health and education. Living standards started to rise as well. It was Stalin's great strength and power over Russia that helped the USSR to win the Second World War. Though his policies did cause a lot of terror and million died, it was unavoidable if Russia was to advance as a country in such a small period of time. Even though the people suffered greatly during Stalin's reign, they still remained loyal to him and Stalin's position as leader was always in control, showing his power and strength. Stalin led Russia into a new age of power, which had been previously started by Lenin. ?? ?? ?? ?? Page 1 of 8 Zain Khan Y11-4 ...read more.