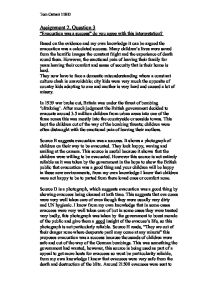 Assignment 2, Question 3 Evacuation was a success do you agree with this interpretation?

“Evacuation was a success” do you agree with this interpretation?

Based on the evidence and my own knowledge it can be argued the evacuation was a calculated success. Many children’s lives were saved from the horrific images the constant fright and the experience of death round them. However, the emotional pain of leaving their family for years leaving their comfort and sense of security that is their home is hard.

They now have to face a domestic misunderstanding where a constant culture clash is unavoidable; city kids were very much the opposite of country kids adapting to one and another is very hard and caused a lot of misery.

In 1939 war broke out, Britain was under the threat of bombing ‘blitzkrieg’. After much judgment the British government decided to evacuate around 3.5 million children from urban areas into one of the three zones this was mostly into the countryside or seaside towns. This kept the children out of the way of the bombing threats; children were often distraught with the emotional pain of leaving their mothers.

Source B suggests evacuation was a success. It shows a photograph of children on their way to be evacuated. They look happy, waving and smiling at the camera. This source is useful because it shows that the children were willing to be evacuated. However this source is not entirely reliable as it was taken by the government in the hope to show the British public that evacuation was a good thing and your children will be happy in these new environments, from my own knowledge I know that children were not happy to be to parted from there loved ones or comfort zone.

Source D is a photograph, which suggests evacuation was a good thing by showing evacuees being cleaned at bath time. This suggests that evacuees were very well taken care of even though they were usually very dirty and UN hygienic. I know from my own knowledge that in some cases evacuees were very well taken care of but in some cases they were treated very badly, this photograph was taken by the government to boost morale of the public and give them a good insight of the evacuee’s life, so this photograph is not particularly reliable. Source H reads, “They are out of their danger zone where desperate peril may come at any minute” this proposes evacuation was a success because thousands of children were safe and out of the way of the German bombings. This was something the government had wanted, however, this source is being used as part of a appeal to get more hosts for evacuees so wont be particularity reliable, from my own knowledge I know that evacuees were very safe from the death and destruction of the blitz. Around 21500 evacuees were sent to Brighton and there was no evidence or record of any bombs landing there. This shows that evacuation was a great success, however Brighton is not very industrialized so not many bombs were targeted in this area.

Some sources suggest that evacuation was unsuccessful for example, source E talks about the lack of hygiene in the city kids and the bad mannerisms “the children went round the house urinating on the walls… even though we told the children and their mother off about it about this filthy habit they took no notice and our house stank to high heaven” This suggests how the evacuees did not feel comfortable to ask where the toilet was and never really felt comfortable and found it hard to adjust to a different culture, this meant there was a large culture clash between the country people and the evacuees.

From my own knowledge I know that this source is reliable as it is a first hand experience from a host, however this is only one family out of the thousands that one negative experience can’t show you an insight of all the family’s that hosted evacuees however source F is an interview from a of an evacuee looking back, “how I wish the common view of evacuees could be changed we were not all raised on a diet of fish and chips eaten from a newspaper, and many of us were quite familiar with the origins of milk. It is just upsetting for a clean and well educated child to find it self in a grubby semi slum as the other way round” This suggests that not all evacuees were stereotypically dirty and unhygienic in some cases some came from good backgrounds and were well educated, most of them weren’t always poor.

Hosts were often very quick to jump to conclusions about evacuees, they were treated poorly even though they were used to higher class backgrounds in the urban parts of Britain, this source is reliable as it comes from a first hand experience, however it this is only a few cases some evacuees were treated fairly and of a higher class than they are used to.

Finally, source I is and interview with the father of a child living in a urban area, he feels his son would be safer from this domestic battle, he thinks that his son would not be taken care of like he would want him to, this shows that some families would not their child to be a subject to this poor treatment they would get in a rural area, this source is reliable because it is a first hand experience but this man’s child has not yet experienced being evacuated it could be a lot better that he expects.

In conclusion, I believe both sides of the argument make very good points I know from my own knowledge that evacuation was a great success as it saved lots of lives and prevented a great amount of grief, however evacuees were subjected to a great amount of abuse and it was hard for a evacuees that came from better backgrounds. After analysing both arguments I think that evacuation was a success it saved millions of lives.