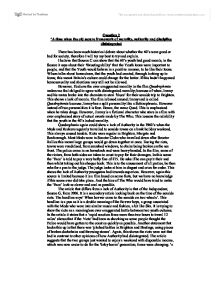 Question 2 'A time when the old secure framework of morality, authority and discipline disintegrated There has been much historical debate about whether the 60's were good or bad for society, therefore I will try my best to try and explain. I believe that Source C can show that the 60's youth had good morals, in the Source it says about their 'thrusting ability' that the Youth Icons were important to people, and that the Youth would behave in a positive manner, to be like their Icons. Wilson talks about Iconoclasm, that the youth had created, through looking up to Icons; this meant Britain's culture could change for the better. If this hadn't happened homosexuality and abortions may still not be allowed. However, I believe the over exaggerated morality in the film Quadrophenia makes me feel obliged to agree with disintegrated morality; because of when Jimmy and his mates broke into the chemists to steal 'blues' for their seaside trip to Brighton. This shows a lack of morals. The film is based around Jimmy and is called Quadrophenia because Jimmy has a split personality like a Schizophrenic. However instead of two personalities it is four. ...read more.

This headline is a pun as it is a double meaning of the Bovver boys, a group associated with the Mods who were into similar music and fashion, a bit like Ska. It is trying to show the riots as a meaningless over exaggerated battle between two youth cultures. In the article it states that a 'rapid reaction force more than two hours to travel 12 miles' shows that if the 'riots' had been as shocking as some people thought the Police would have gotten to the coast as quickly as possible. Another statement that backs this up is that there was 'pitched battles in Brighton and Hastings, using pieces of broken deckchairs and throwing stones'. Again, this shows the riots were not that bad in contrast to other opinions of how Authority had disintegrated. The article suggests that the two groups just wanted to enjoy a weekend with disposable income, which was now easier to do for the 'baby boom' generation, times were changing. 'a movement of young, mainly working class Britons with cash to spend enjoying a day out'. I think this source is much more reliable as it is written by a well respected newspaper and it shows a picture of a small feud between a Mod and a Rocker being held back by Policemen. ...read more.

An authoritative figure made the speech, which makes this source very reliable, and it was from 1964. However, the limitations could be that Wilson put on a Yorkshire accent to be more common. I believe that the question quoted is over exaggerated as it is trying to say that all morality, authority & discipline had been lost. We also have no idea if this quote was in hindsight or not which lessens the reliability of the question. Yes, morality may have declined by people taking drugs, but not everybody took the drugs and the film exaggerates how many people took the drugs, and it is a movie based on fact. Authority also may have declined but Independent article is a more reliable source and it tries to show that the riots were not as bad as first thought. Again though the scene from Quadrophenia at the Magistrates may have been over exaggerated on real events. However, from Source J I do believe discipline may have declined, partly due to the Profumo scandal, but that was of an upper class nature, and it did not happen to everybody. Working class people wouldn't have been able to afford or host such big s*x parties in the first place. Overall I disagree with the interpretation of the quote. ?? ?? ?? ?? ...read more.